Whether they were billed as “director of photography” or “camera,” these five men crafted indelible images with lens and light. (I say “men” because cinematography was and still is more of a boy’s club than directing [1][2].) Their careers span a wide range of the “classic” eras in Hollywood, Europe, and Japan; and their work continues to influence moviemakers and cultural memory.

“The mood of tragedy is enhanced by a strong contrast of deep blacks and glaring whites – shadows and highlights. In drama we light for mood, we paint poems. Lighting with its ups and downs becomes a symphonic construction paralleling the dramatic sequences.”

Born Johann Altmann in what was then Austro-Hungary, Alton was sent to New York to flee the Nazis. His trademark dark style began with work in Argentine film before he moved back to the States. Alton’s view of his craft is encapsulated in the title of his book:  Painting with Light [Amazon | OpenLibrary]. Though dated and eccentric, the book gives great insight on lighting principles and Hollywood practices; such the general rule to light men for character and women for beauty, and a two-paragraph counter to the industry complaint about lighting darker-skinned people in a flattering manner. 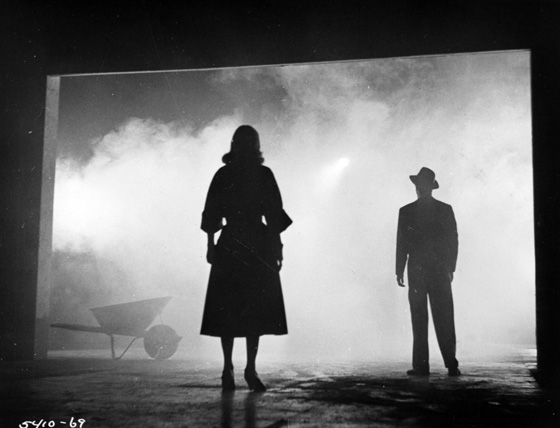 Alton’s philosophy of lighting was most evident in his work on films later termed film noir. He was assigned to many such features due to his ability to work fast and to “make a B-picture look like an A-picture.”  The Big Combo is an uneven movie, but as a visual experience it is astounding, bringing to the screen images like the signature noir shot above.

T-Men was the first of Alton’s collaborations with director Anthony Mann.  My favorite of their movies is Raw Deal, which isn’t over-narrated and doesn’t have government-approved story filler. However, T-Men is a cinematography landmark, featuring the bathhouse murder scene above.

An American in Paris (1951, directed by Vincente Minnelli)

Vincente Minnelli requested that Alton, instead of principal photographer Alfred Gilks, shoot the showstopping ballet sequence. This was Alton’s first work in color, and he reportedly infuriated crew like the set designer and costume designer because of how his lighting altered the look of their work.  However, the sequence became one of the most popular in American cinema, and Gilks and Alton shared the film’s Oscar for Best Color Cinematography.