Friday started with a screening of Becket at the Egyptian Theatre; Peter O’Toole himself requested that they screen this film. I had seen it before and thought it was very serious. Yet, seeing it on the big screen with a large audience, I noticed the film’s humor like I hadn’t before. It is filled with deeply funny moments. This is an example of how seeing a film on the big screen can change your wholly perception. O’Toole then had a brief conversation with TCM host Ben Mankiewicz. 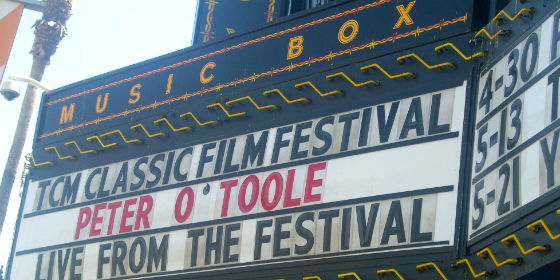 After that I met up with Kristen from SalesOnFilm as we waited in line in front of The Music Box for the taped conversation between Robert Osborne and Peter O’Toole. This was an amazing conversation (and should air some time within the next year on the network). Apparently Peter O’Toole was a sailor with the Royal Navy before he went into acting, and was part of the Cod Wars (I suggest you Google that). He told wonderful stories about the making of Lawrence of Arabia.

He also did some great impersonations while telling his stories, including the best Kate Hepburn I’ve ever heard (watch out Cate Blanchett). Perhaps the best question Osborne asked the star was how he felt about being an 8-time Academy Award nominnee. O’Toole called himself “the world’s biggest loser.” When asked if he’d like to win an Oscar, O’Toole responded, “Indeed I would… and I ain’t dead yet.”

I ended Friday night with a screening of Spartacus on the main screen at Grauman’s Chinese theater. Kirk Douglas talked for about 30 minutes before the film began and boy is he still sharp as a tack, after all he’s “only 94.”