Next up for me was my very first red carpet event. While waiting for the event to start I chatted with journalists from France’s Le Nouvel Observateur. Most of the international press was at the end of the red carpet, so a lot of stars skipped us. We did, however, get to speak with a handful of stars, including Diane Baker, Dorothy Herrmann (daughter of film composer Bernard Herrmann), Andy Marx (the grandson of Groucho Marx), Chris Isaak and Patricia Ward Kelly (widow of Old Hollywood legend Gene Kelly). Look forward to transcripts from those interviews a little bit later in the week. 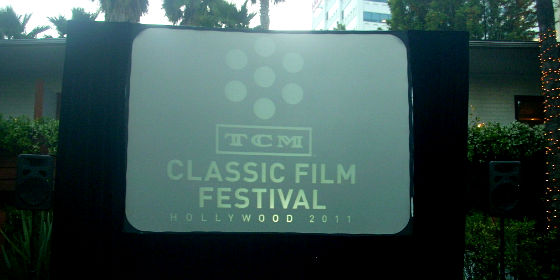 I wasn’t able to attend the screening of An American in Paris, instead attending a poolside screening of the 1965 Elvis flick Girl Happy at the Roosevelt Hotel. Chris Isaak and former Miss America Mary Ann Mobley introduced the film. The atmosphere was perfect for the film and, because of that, maybe I loved that film a little more than I should have.

After, my new found friend Trevor (who is currently only found on Twitter, but if I have my way he will be sharing his vast knowledge of film with the internet sooner rather than later) and I just missed out on a screening of The Devil is a Woman. Instead we saw the original The Day the Earth Stood Still, one of many films at the festival featuring scores from Bernard Herrmann.