Julyssa: I am so new to the whole BBC Sherlock fandom that I am not sure what is going on or not. But just because she likes Sherry doesn’t mean she stops being gay… I mean… sexuality nowadays is so varied.
Mirella: That’s what I thought too.
Julyssa: But I don’t think Sherry’s aura has anything to do whether he is gay or not, he is just Sherry. He is so brilliant and so awe inspiring that you are drawn to that. Like people tend to be drawn to power. Then again, Cumberbatch is one sexy bitch… just saying.
Mirella: Yup, I have straight friends who feel strangely attracted to Sherlock XD Straight male friends, I mean.
Julyssa: His arrogance and intelligence is so sexy. Like makes me want to tie him down to the bed and have my wicked way with him. *cough cough cough*
Mirella: Irene did say “smart is the new sexy” XD
Julyssa: Oh indeed. But getting back to Sherlock being gay or not. I find that the fandom wants him to be gay, and for the love of me, I don’t understand why.
Mirella: It is not totally the fault of this series actually. The Sherlock Holmes fandom has existed since the original books were published and women have been drawn to them as a couple for ages…
Julyssa: I don’t think solving crimes and sex should mix, but that is me :P Then, Law and Downey happened… 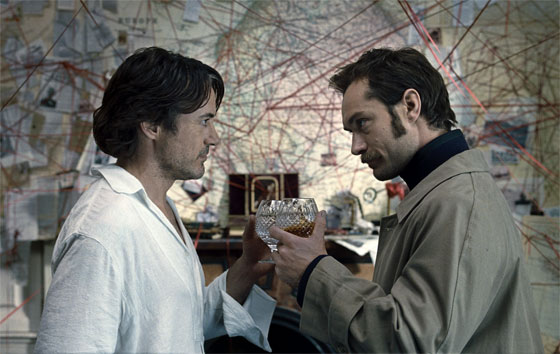 Mirella: Oh yes… it also didn’t help that RDJ was totally milking it, and Law was playing along too.
Julyssa: What is it with bromance/fanservice? Fangirls go crazy for it, the companies push for it and it’s all a craze of who is f*cking who, but it’s always between men. I don’t get it.
Mirella: Fangirls have gone crazy forever, though. So it is no surprise. And like I said, if you read the Sherlock Holmes books, and take things out of context…
Julyssa: So, do you think Sherlock is gay, do you want him to be gay, or do you just want to see Cumberbatch get it on with a guy? :P
Mirella: I think Sherlock is a homoromantic asexual, at least where John is involved. John is heterosexual, but I think he really loves Sherlock.
Julyssa: I really love their relationship, at least the BBC one. They are kind of broken, but they get each other… and I love that Sherry lets John in, he decides to trust John, and OMFG I am gonna go all fangirl here. But, SHERRYYYY! ;A;
Mirella: I think it is mostly because whatever there is, he knows it… Sherlock was actually lonely and there he is, John who thinks he is brilliant, and always acknowledges it. John doesn’t act like he thinks Sherlock is a freak. He’s fascinated with Sherlock and Sherlock eats it up. 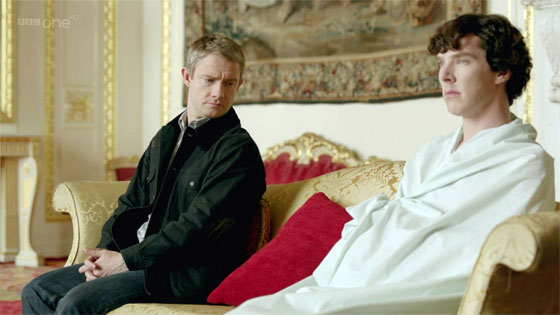 Julyssa: They are like a couple but without the sex, and it’s so damn cute.
Mirella: Also John is kind of an adrenaline junkie sometimes, so living with Sherlock is awesome for him too. That’s why they are homoromantic, they love each other, but they don’t want to have sex with each other, at least, not for now. That said, as for watching Cumberbatch getting in on with a guy (and by guy, I mean Martin Freeman)… well, yes, of course.
Julyssa: Lol! You are a freak! But I love you! Wanna be the John to my Sherlock?
Mirella: I would be the worst John. I would totally wouldn’t clean up after you XD
Julyssa: Then we hire a maid!
Mirella: Clearly, because Mrs. Hudson is not a housekeeper.
Julyssa: Indeed!