Seidman is a very carefully crafted love story. How was the experience recreating some of the emotions that teenagers go through at that age?

Despite my age, I still remember my teenage years vividly — all the emotional chaos I was going through; the certainty that I was far smarter than the adults around me (which was probably only partly true); how easily I could be humiliated. But it’s too easy to write a YA novel based upon your experiences when you were a teenager and lose track of what things are like for teens today.

Things haven’t completely changed, but they have changed somewhat. I do try to stay in touch with teenagers, so I don’t drift too far afield. I don’t hang around high schools (which would be weird), but I’ve been involved in indie film projects with young people and some of my friends have sons and daughters in high school or who have recently graduated. I often torture (figuratively) my younger friends with interviews about their high school experiences. 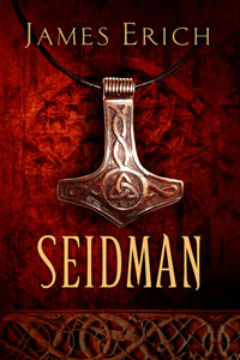 For a story that centers on a character between the ages of 13 and 15, there is a great deal of maturity. How did you manage to write characters at such a young age with such depth?

I’ve always been very intellectual and my characters generally reflect that. In fact, it’s sometimes a problem. It’s possible for a protagonist to be too introspective; too aware of his motivations and thought processes. So occasionally I would move the introspection into another character, like Alfdis. I would have Kol do something childish — wallowing in his misery during the boat voyage from Iceland to Norway, for instance — and allow Alfdis to tell him how foolish he was behaving.

Speaking of the maturity of youth, the relationship between Thor and Kol is very intricately handled. How were you able to find a balance between the desperate need for Thor to reassert his manhood and Kol’s desire to be close to him without the story becoming melodramatic?

For that, I had the help of several people who read early drafts of the story. In one draft, Kol reacted melodramatically to Thorbrand’s announcement at the Althing (I don’t want to give it away) and my readers refused to believe that Kol wouldn’t understand that this is the way things had to be. He’d grown up in Iceland. He knew the way people were expected to behave. So I went back and rewrote the scene, with Kol being more reasonable. But not too reasonable. He’s still upset. He’s still hurt. And he’s still angry.

In another scene, I’d written an over-the-top moment that read like something out of Wuthering Heights, with Kol running away from Thorbrand in the rain (*groan*) and Thorbrand grabbing him and pulling him in for a dramatic kiss. Even after several readings, I couldn’t stop cringing when I read that, so I had to tone it down a bit.