Welcome back to FX, Ryan Murphy! 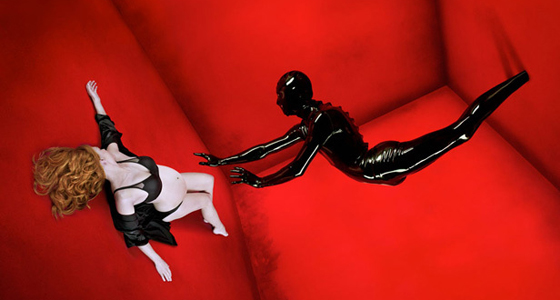 It’s been a while since we had Ryan Murphy (Nip/Tuck) on FX . Now he returns to the channel with American Horror Story. The main premise has the Harmon family — Ben (Dylan McDermott), Vivien (Connie Britton) and Violet (Taissa Farmiga) — moving into a new house, unaware that it is haunted. Also, Ben and Vivien are trying to salvage their relationship while Violet suffers from depression.

While American Horror Story is advertised as a horror-drama/psychosexual television series, I couldn’t help but laugh at certain scenes that felt a bit cliché or that reminded me of Glee at times. And I’m not really an expert on the horror field, but the pilot felt more weird, WTF-ish and fetish-esque rather than scary — it does fit its psychosexual hype, however.

Yet thanks to the weird, intriguing vibe of American Horror Story and the soundtrack, the pilot was somehow good enough (better than most of the pilots that recently premiered) to get me hooked into watching the next episode  It’s no Walking Dead by any means, but it can make up for some pretty fucked up television, and with Ryan Murphy’s mind, shit can happen.

If you were skeptical about watching American Horror Story because of Glee, the show is closer to Nip/Tuck territory than the musical show. Let’s hope it gets better next week — based on the final minutes of the pilot, the hellacious ride has only begun.