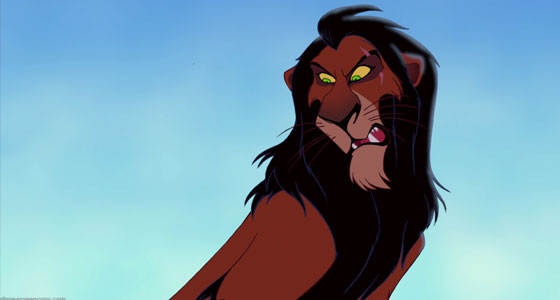 Considering the couple of times I have mentioned The Lion King, you should have seen this one coming. Oh, Scar. You were so the most fabulous one! Voiced by Jeremy Irons and having the most excellent villain song of all time, he’s part of what makes The Lion King my favorite Disney animated movie ever (not counting Pixar movies). He’s charismatic, he’s resentful, he schemes, he manipulates, he gloats, has excellent facial expressions, great hair, and he’s color-coded for your convenience!

Now, this is the only villain in my list who actually gets what he wants. But he’s such a bad king, there’s a drought in the Pride Lands. Yeah, I don’t know how a lion can affect the weather [1], but I guess Mother Nature hated him too. So, it didn’t end up too well for poor Uncle Scar, but hey, he still has the best villain song, which never failed to cheer me up, “Yes, my teeth and ambitions are bared. Be Prepared!”