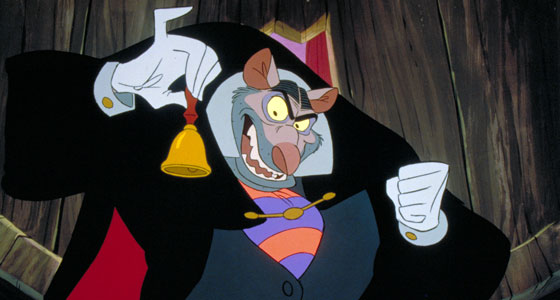 Yeah, I don’t care that this movie is from 1986. I saw The Great Mouse Detective first in the 90s, when my father got us a VCR and started renting movies. And while I loved Basil and Dawson (Holmes and Watson’s mice counterparts), Rattigan as a villain caught my attention instantly. I mean, he is voiced by Vincent Price! That should be enough. But nay! He’s also a rat version of Professor Moriarty, Sherlock Holmes’ archenemy.

Of course, you better never call him a rat to his face. That’s a berserk button. He was so affably evil until, at the end, he exploded in a psychotic rage and became truly terrifying. Also, his relationship with Basil had slight homoerotic undertones. Which is something I saw when I watched it again ages later. Finally, his villain song was made of awesome! I was also singing, “Oh, Ratigan! To Ratigan! The world’s greatest criminal mind!” with his minions!