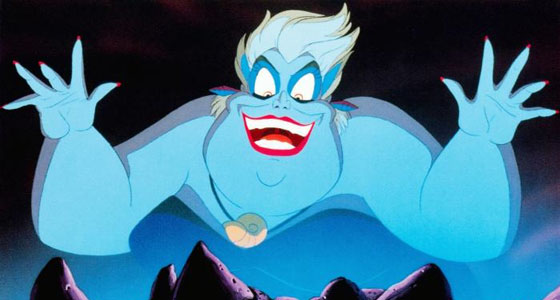 While this movie premiered in 1989, it belongs to the Disney Renaissance and I watched it like a year before The Lion King. It was a school outing and for some (awesome) reason, they decided to rent a theater and show us The Little Mermaid. I loved it so much, even if I always thought Ariel was dumb to leave her cool mermaid life for a bland boy, even if he was a Prince.

Of course, years later I realized Ariel was a human fangirl, so I understood her a bit better. So, in my evil kid mind, I didn’t mind at all that Ursula took advantage of this dumb girl while singing her great song “Come on, you poor unfortunate soul, go ahead! Make your choice!“. We could all see the deception a mile away. Ursula was fantastic, she was comfortable with herself, as you could see for her body language, but she was also quite insane. After the movie, I read the story by Hans Christian Andersen… man, it was a downer, and the Sea Witch wasn’t as great or evil as Ursula.