While I have nothing against Disney Princesses, the Disney Villains is the franchise for me. I have always been fascinated by them, and they got the better songs. So here’s a list of my favorite Disney Villains of my 90s. I specify “my 90s” because a couple of them appeared in movies made in the 80s, but I saw them in the 90s for the first time~ 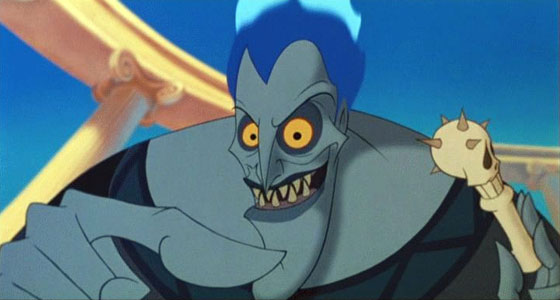 This guy is the odd man out. The reason? It was the villain of a movie I was not crazy for. In fact, in 1997, I was more interested in Don Bluth’s Anastasia than Hercules. Which is strange, because I love Greek Mythology. But the two things I liked most in the movie were the song Zero to Hero and its villain. Hades, voiced by James Woods, was simply awesome. He may not be as memorable as Scar as an evil uncle, or as Ursula as a corrupter and maker of terrible deals, but he was the greatest thing in a so-so movie (by Disney’s standards).

It was because he was so spirited and prone to angry breakdowns; also had the funniest facial expressions. The reason he is not higher on the list is because he doesn’t have a song. And as you will see as the list progresses, villain songs are a big deal to me.