This is Amy reporting on her Sci-Fi experiment, which started roughly two weeks ago when I made my sci-fi-hating mother watch Battlestar Galactica [1]. At the moment of my writing these first paragraphs, we’re only three episodes away from finishing Season 1.

Like I had suspected, my mother is most engaged with the show when it gets slightly political. The first two episodes, 33 and Water, connected with her due to the survival factor. After all, deprivation of sleep and lack of water is something my mother can relate to immediately. However, it began getting interesting when we watched Bastille Day — the episode involving prisoners and riots.

There’s also Tom Zarek (Richard Hatch, prisoner) ~ My mom’s got her eyes on you! She doesn’t trust you at all, and she thinks Lee (Jamie Bamber, with the gun) is an idiot. And she hasn’t even heard of Fat Lee yet. 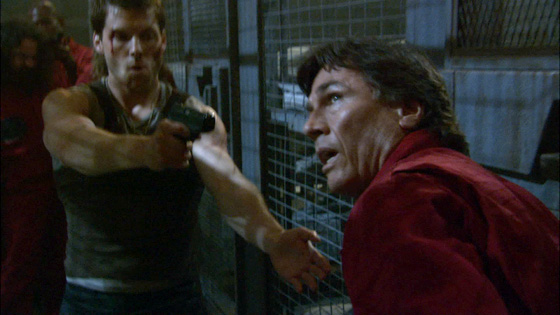