The Fangirly Diary of a Geek Girl: Whose team they prefer to be on

Here’s the trailer for Doctor Who series 10, Capaldi’s final season as the Doctor. His time as the Twelfth Doctor will come to an end with the 2017 Doctor Who Christmas Special. The new trailer features the Doctor (Capaldi), new companion Bill (Pearl Mackie), and returning ally Nardole (Matt Lucas) marching into battle.

Finn Jones and Jessica Henwick talked with Collider about their respective roles in Netflix’s Iron Fist, and why they took the job in the first place:

What excited me about this role was that you’re taking these superhero characters, and bringing them down to the real world, and you’re making them have very real problems and contradictions. And I think with both of our characters, the most interesting thing about the characters are the internal struggles, and how they deal with day-to-day problems in love while also having these superhero attributes.

Before the Academy Awards, we have the Razzie Awards to “look forward to”. And hey, this year, Batman v Superman: Dawn of Justice won their fair share of Golden Raspberries, 4 to be exact. Zoolander No. 2 got just the 1… congrats Kristen Wiig? The other big “winner” was Hillary’s America, a “documentary” which also won 4 razzies.

It’s been 8 years since Avatar, and now we finally have a date for the production start of Avatar 2. Cameron’s long-awaited sequel to the most successful film in box office history is set to begin filming August 15.

Then the Academy Awards happened, and after a fairly formulaic ceremony, where the Oscars weren’t so white, we had the moment that will make this year’s awards the most memorable in recent history. You know what I am talking about. Poor Warren Beatty and Faye Dunaway were given the wrong envelope and in the middle the confusion La La Land was declared the Best Picture winner, when the actual winner was Moonlight. Yep. Anyway, here’s the full list of winners.

Star Trek: Discovery will debut in the vague date of “sometime [in] late summer, early fall”, said CBS chairman Les Moonves. The series was originally set for a January debut, then May, then there was no schedule. Frankly, I’m glad we have a date of sorts. Unless they move it again, that is. The reason? “We’re not going to rush it in. There’s a lot of post-production.” Dude also totally blames Star Trek doing great on Netflix as the reason why they decided to make people pay for it on their All Access streaming service. Boo!

Samurai Jack season 5 will premiere next month and so creator Genndy Tartakovsky had an interview about it with EW. Dude talked about the darker tone of the series, perfectly matched to this “Bug’s Bunny and film noir” sensiblity~

The biggest thing that we were able to take advantage of is more of a mature style of storytelling, [though] Jack never pandered to really tiny kids anyway. But at the same time the most exciting things [are] we get to dive into the madness of Jack right now and where he’s at and that he’s really lost hope and he’s just miserable and that kind of psychosis. 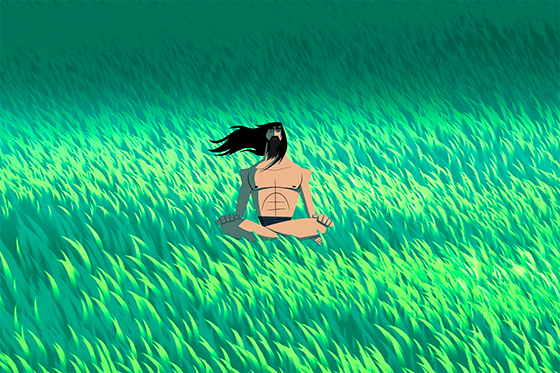