The Fangirly Diary of a Geek Girl: What time is it? It’s casting time!

Greetings, my fellow geeks. This week we have some news that came after BAFTAs and a bit of interesting casting news items for geeky movies. But before that, let’s start this week recount with a most excellent happening:

Happy Birthday, Tom Hiddleston! Yes, one of my favourite persons ever has turned 32 today! And his fans even got their Happy Birthday wishes to trend on Twitter! 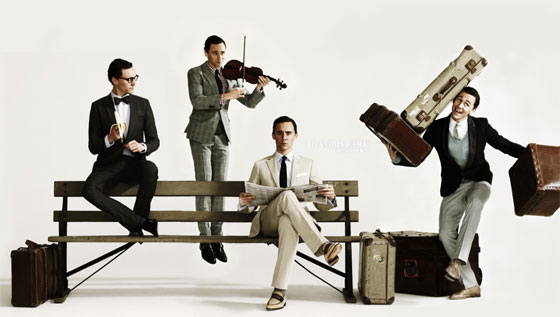 So anyway, here’s the first look of Loki in Thor: The Dark World. Yep, itis an action figure seen at Toy Fair 2013. Also, poor Loki seems to have a wonky leg.

Talking about toys, apparently some people can be spoiled by LEGO Iron Man 3 toys. I guess the words “Iron Man vs. The Mandarin: Ultimate Showdown” are a giveaway~ Of course, the poor kid’s LEGO, that is Hasbro’s KRE-O, also has spoilery toys, in this instance we have Star Trek Into Darkness ones. Is that generic villain, Benedict Cumberbatch’s John Harrison?

Yay! Monsters University preview featurette offers new footage! So Mike’s a nerd, Sulley is a jock, and nobody is surprised. Looks super fun, though~

So Bryan Singer is unsure if Halle Berry will come back as Storm in X-Men: Days of Future Past. Yeah, I never felt Halle as Storm anyway, so if you wanna recast that’s fine for me, Bryan!

It’s BAFTA time! And Empire Online covers it quite nicely. Their account was full of moments of LOL, and also reminded us twice of last year’s Lokisoup~

As for Empire, we’re not videblogisoding this year alas, because we didn’t want to risk Chris’ delicate health in this cold. Also, because Tom Hiddleston isn’t nominated to bring him soup like last year.

Tom Hiddleston has arrived to present Best Production Design – so it looks like he could’ve brought Chris soup after all!

Talking about recent birthday boy, Tom Hiddleston, he was there looking all handsome with also beautiful Saoirse Ronan. He also gave a couple of interviews on the red carpet, but when asked about career news, he got coy:

I’ve got a thing, but I’m not allowed to tell you about.

Martin Freeman was also there to present an award, and he gave a brief interview on the red carpet, where he talked about things that people care the most about: The Hobbit and Sherlock. He will be filming them in late May and next month, respectively. Yes, The Hobbit will need more filming!

BTW, Alice Eve and Simon Pegg talked on the red carpet about Star Trek Into Darkness. She talk about how Benedict Cumberbatch is not Khan, he talks about the J.J.Abrams situation about Star Trek and Star Wars:

J.J.’s the perfect choice for that job, and I just hope he doesn’t forget us Trekkies in the corner. He will do Star Trek.

Of course, then he tweeted that he really has no idea if he would actually do both.

And, in the only not BAFTA-related news of the day, here’s a place where you can see all the animated shorts nominated for this year’s Academy Awards: