So, here we were talking about Industrial Light and Magic’s work with Warcraft looking good, and lo and behold: an epic picture celebrating its legacy!

Star Wars: The Force Awakens co-writer Lawrence Kasdan said that the aim of the film was to prevent making a “long, bloated blockbuster”, also no Lando Calrissian… for now!

A lot of very entertaining movies lately are too long. In the last 20 minutes, you think, why isn’t this over? We didn’t want to make a movie like that. I mean, we were really aiming to have it be — when it’s over you’ll say, ‘I wish there’s more.’ Or, ‘Wait, is it over?’ Because how rarely you get that feeling nowadays, and I think we’re headed there. But it means that there will be constant critical looking at it from now to the end, saying, ‘Do we need this? Do we need that? Is it better if this comes out, even though we love it?’

Chris Pratt won’t be Indiana Jones. At least he doesn’t thinks so. Not only his franchise card is full (if Jurassic World does well… which means his character doesn’t die) and “two more Guardians plus another couple…” (maybe a couple of sequels and then appearing in other Marvel movies, probably Avengers: Infinity Wars ones). Besides, he has been around Spielberg for Jurassic World and dude didn’t mention anything. So yeah.

The tone that was really communicated was the sense of realism that they were going for. I think the way that [manifested itself in] the costume was through the armor and making it feel a little bit more padded than you traditionally think of Daredevil being. When we do these designs, there’s a concept of grounded and a concept of reality. The grounded nature that they brought to the vigilante costume was the simplicity and effectiveness, because you’re trying to conceal your identity but also [have to be] mobile enough to fight. 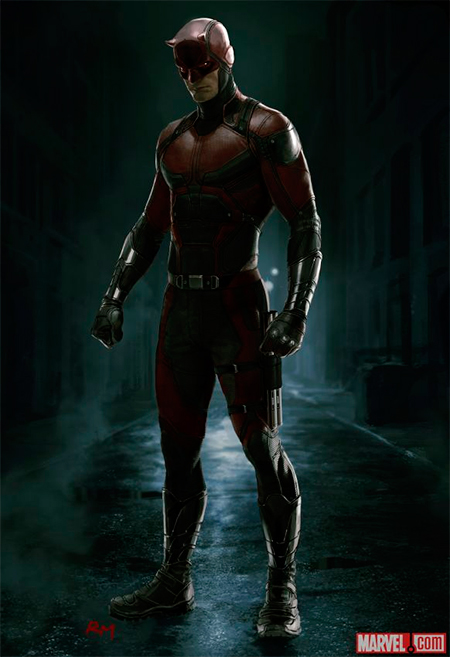 We are totally getting the multiverse for The Flash Season 2! Protagonist Grant Gustin talked about it:

What’s fun about this show is that there’s going to be multiple timelines as we move forward. I think we’re going to start showing Earth-One and Earth-Two in the near future. There will be kind of different dimensions going on.

Lo and behold! The first full trailer of Ryan Murphy’s Scream Queens! I did not recognize Abigail Breslin on the first watch. Jamie Lee Curtis looks fantastic tho!

Tomorrowland writer Damon Lindelof talked about writing female characters. And dude said cool things and all, but couldn’t avoid putting other movies down to show how much better his movie (supposedly) is.

Yep, John Lasseter was in Cannes promoting the Disney/Pixar slate, and talked about how for the first time in forever Pixar will be showing two movies in the same year: Inside Out, which premiered at Cannes out-of-competition, and The Good Dinosaur, which will premiere during US’s Thanksgiving holiday. Also, it seems all the movies he previewed (The Good Dinosaur, Finding Dori, Zootopia and Moana) were decent to good according to Variety. At least for those few minutes of clips showed. Except for Toy Story 4, which he didn’t have any clips ready yet but was talked about!

Remember how Matthew McConaughey wouldn’t mind being part of a comicbook movie? Rumor has it that dude was being eyed to play Norman Osborn/Green Goblin in the Spider-Man reboot! I wouldn’t mind that actually.

Costume designer Michael Kaplan talked about his work on Star Wars: The Force Awakens, specially how he’s making the color palette of The Empire and the Rebels different, so we won’t get confused when they start fighting each other.

I made two very, very clean-cut palettes. The Empire is in very cold blacks and grays and metallics and teal blues. The Rebels are in khakis and olives and some oranges—warmer colors. So there are very clear separations and you know who you’re looking at when you see them. Also, the lines of the costumes. The Rebels are kind of wools and natural fibers, cottons, and the Empire is very hard-lined, almost like Thierry Mugler. Very kind of edgy.