Yay! The Berlin premiere of The Hobbit: The Desolation of Smaug was more enthusiastic than the American one, if I may say so! OK, so it was also more chaotic but come on! There were more members of the cast, and they were all so happy and hugg-y! And there were also more cosplayers and there was a dragon head emerging from a pile of gold! 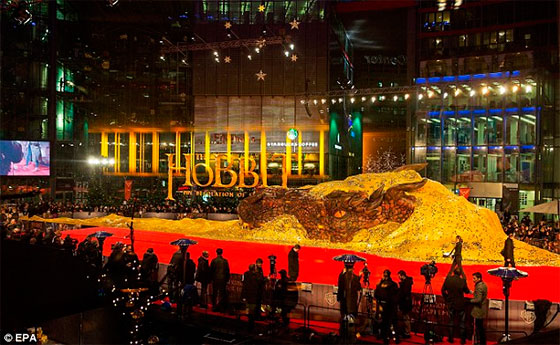 This right here made it the better premiere.

Empire Magazine had quite the lenghty chat with Benedict Cumberbatch, Martin Freeman and Sherlock showrunners Mark Gatiss and Steven Moffat. Benedict talks about how he keeps it secret, keeps it save. And he sure does preffer to live spoiler-free!

I am a secret-filled treasure trove at the moment. I’ve got so many things I can’t talk about, but all will be revealed in due course. But I am absolutely fine with it, and without meaning to patronise at all, my personal preference is being surprised in the moment of watching something, rather than knowing ahead of time. But I do also understand why everyone’s desperate to know.

Gatiss also talks about the character of Molly Hooper, an original character that the fandom loves. He shouldn’t be so surprised though, Molly is quite interesting!

“Sources” at BBC hint about Peter Capaldi’s Doctor costume. That is gonna be a mix between old and new, “bit old fashioned to denote the fact that he is the oldest Doctor” but also “looking to the future as well”. Yeah, I have no idea what it means. While I appreciate fashion, my knowledge of it ends in what looks good on a person, and not much about trends old or new~

Yay! The Andy Warhol’s Interview with Sir Ian McKellen and Sir Patrick Stewart! We learn, among other things, that Patrick bakes and Ian has had that many creepy encounters with crazy fans unlike poor Patrick. 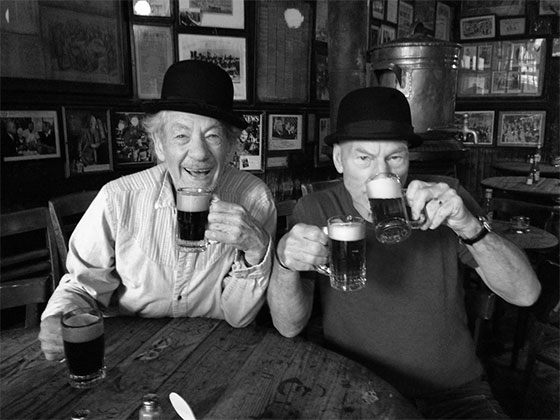 The most epic bromance ever!

It’s been confirmed that Bryan Singer will direct X-Men: Apocalypse, and it’s “intended to focus strictly on the younger James McAvoy-Michael Fassbender cast”. Yeah, that was actually the obvious choice… for everything!  Also, despite what rumors said, Apocalypse ain’t an alien! Bryan Singer totally confirmed that on his twitter.

Apparently, Jason Momoa is in talks to be in the Batman vs. Superman movie that is slowly becoming a Justice League lite. And what’s he gonna play? We have no idea. But it could either be the baddie and Superman-killer Doomsday, or, since the movie is full with Justice League members, maybe the Martian Manhunter. We could have had it all, Jason. You could have been Drax The Destroyer in Guardians of the Galaxy. Oh well, I guess DC pays more. Accept this franchise money, dude! And here’s to hoping you get a lasting character~

Executive Producer Jeffrey Bell talked about Agents of S.H.I.E.L.D., and the (brief) return of J. August Richards on the show, as well as more possible returns and even more character. I kinda wish Richards was a regular already. I just like redeemed heroes~

He’s the guest star. I would say it’s as big as it was in the pilot. The difference is the place that he’s in. Rather than being a down on his luck guy who the world’s against, he’s a guy who’s cleaned up and is working hard. He’s trying to prove to our team that sparing him at the end was a great thing. He has a second chance and he’s determined to prove they made the right call in doing so.

Here be The Walking Dead news that are a bit spoilery, but if you watch the show you should have guessed these already: Carol will return before the season is over, the Sanctuary will come into play, and there will be backstory flashbacks!

Here’s a teaser for Vikings season 2… with Lorde’ “Gore and Glory” as background music.

Here’s the alternative version sans Lorde. The new season will premiere in February and I can’t hardly wait!