Empire Magazine is turning 25 this year, and to celebrate 25 different X-Men: Days of Future Past covers will be released. Some are very awesome… and some suck hard, like fucking Quicksilver’s! 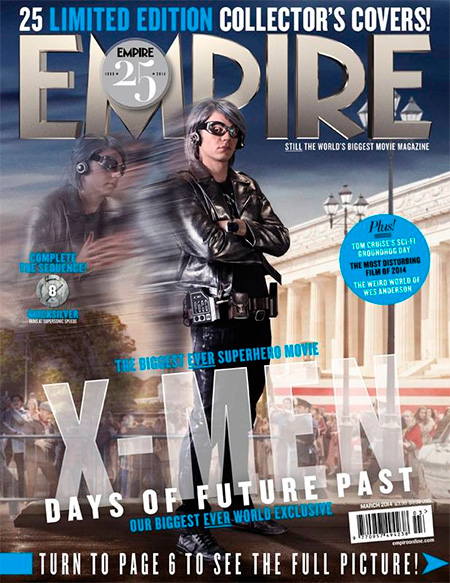 The hell is this! Whedon, save us all!

Ben Affleck talked about Batman and his other experiences in Superhero movies *cough* Daredevil *cough* with Playboy. He also talks about his regrets~

The only movie I actually regret is Daredevil. It just kills me. I love that story, that character, and the fact that it got fucked up the way it did stays with me. Maybe that’s part of the motivation to do Batman.

So, I posted on my FB that first feature of Thor: The Dark World Blu-Ray/DVD where we have Hiddles as Loki and Captain America. Yup, that story of Hiddles being the stand-in for Chris Evans and using the opportunity to try the Captain America costume… Hiddles was rigth, and they did put it in the Blu-ray/DVD. Yay! Here’s an interview that first addressed this moment~

Talking about Blu-ray/DVD, The Wolf of Wall Street‘s will feature another hour’s worth of sex and ‘fucks’! No cut scenes, actually, mostly extended scenes of what we have already seen. That’s fine. I will need more food and water to sit through it though! But it’s not as if it was a LOTR’s marathon!

Moffat says he cried when he wrote Sherlock’s Best Man Speech. Good. It made me cry too! But just a bit. I also didn’t cry when Amy and Rory said good-bye… or even when Matt Smith left…

I loved writing the speech, and I don’t normally cry when I’m writing. I don’t cry at all unless my finger’s trapped in something. I didn’t even cry when I wrote Amy and Rory’s good-bye in Doctor Who. Sadness doesn’t make me cry. I think a simple expression of devotion probably does.

Jaguar finally released their SuperBowl ad called British Villains “Rendezvous.” I posted it on my FB, but here’s also a nice Behind-The-Scenes video where all actors (and director) talk about villains and Jaguars:

Here is more Brit actor news, and dear Benedict Cumberbatch has another job in his near future. He will star in Blood Mountain, and his role is yet unknown. Here’s what we know about the movie:

The film follows a private military contractor whose special forces team is ambushed and killed during a covert raid, forcing him to personally escort one of the world’s most wanted terrorists over hostile terrain in order to bring him to justice. With a bounty at stake and insurgents and rival mercenaries hunting them, the two find themselves facing not only their enemies, but each other in their fight for survival.

J.J. Abrams talks about how his need for secrecy won’t work for Star Wars, and how he’ll learn to “compromise” even though he really does prefer that “sense of anticipation”~

[Star Wars has] always been a more open, fan-engaged universe than I’ve been used to, there’ll be some sort of compromise… there’s a purity in not knowing every little thing [about a story ahead of time]. We’re living in a moment of instant information and a sense of entitlement to that information. I think it’s nice to remember that there’s nothing wrong with a sense of anticipation.

So, we are definitely getting a Captain America 3, and the Russo Brothers are back as directors! They are even already “putting together an outline of what the third film’s story arc would look like“.