The Fangirly Diary of a Geek Girl: To lose an Ant-Man

Greetings, my fellow geeks! There were interesting news this week about Star Wars and the official name of the Batman/Superman movie, but it all was forgotten for upsetting and shocking news courtesy of Marvel. Here’s how the week started:

Benedict Cumberbatch’s got a new gig! He’s going to be in Iraq war drama The Yellow Birds. He gets to be an older sargeant who takes two younger soldiers under his wing. Those soldiers being Tye Sheridan and Will Poulter.

Hugh Jackman doesn’t want to stop being Wolverine anymore~ The press tour of X-Men: Days of Future seems to have reinvigorated him! Also, the pay is good! Guess, we will indeed have an Old Man Logan film~

I’m less sure as it goes along. Because after seeing this movie, the whole thing feels fresher to me than ever. And during this movie…I don’t want to spoil anything, but it’s kind of like a clean slate, so who knows where it’s going to go. As long as I have the passion for it, and the fans will have me.

So, while it’s probable we will get a Pacific Rim sequel within our lifetime, Legendary ain’t in a hurry for it. Aw, man!

We’re not just going to do Pacific Rim 2 just to do it. Right now we’re talking to Guillermo del Toro. If we can crack the story, we all think it’s great, and it’s him at the helm, then fantastic. But right now there’s nothing going on officially to proclaim.

Godzilla, despite some people finding it a tad boring and slow, has already broken a Box Office records! Yep, it got a nice $38.5 million on Friday, making it the highest opening day of 2014! And yep, a sequel is already on the works!

Talking about Box Office, Captain America: The Winter Soldier has grossed over $700 million worldwide. That makes it the highest grossing of the year (so far) and remains the 3rd highest in the Marvel Cinematic Universe after The Avengers and Iron Man 3.

Here we have some children’s books (including a reusable sticker book!) for Guardians of the Galaxy! Looks cute~ 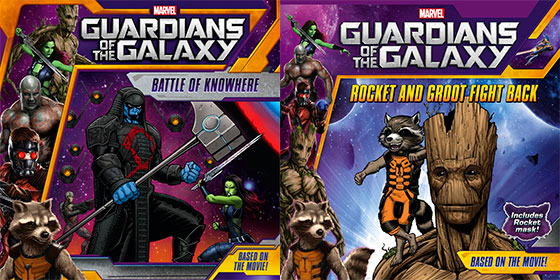 Remember when I talked about Lumberjanes? That awesome comicbook co-created by Noelle Stevenson a.k.a. Gingerhaze, one of my favourite Tumblr artists? Well, the #1 issue was sold-out and, after the release of issue #2, Boom! Studios announced that Lumberjanes is now an ongoing series! Yes, not just 8 issue limited series now! Congrats, ladies!

Entertainment reporter Joe Michalczuk sure is ballsy, and between interviews with all our favs, he’s managed to get enough of them to put together this nice video where they give congratulations to his new bride~

Yep, Samuel L. Jackson is the best, although having Anne Hathaway and Kate Winslet quoting Les Miserables and Titanic, respectively, was also made of awesome. Also great, Miss Piggy and Kermit! Run for the hills, indeed!