There were rumors that said that Chris Pine was offered not one, but two roles in the DCEU (DC Expanded Universe, yo!): The Green Lantern Hal Jordan and Steve Trevor, Wonder Woman’s love interest and Justice League’s government liaison. Now we know which part Chris Pine has: that of Steve Trevor. I guess Green Lantern was never really offered. I mean, why would you choose to be Trevor when you could be Green Lantern? Not that I particularly want him to be Hal Jordan. I’m just saying~ But The Wrap, who first posted the information, said that Steven Trevor “will be no mere love interest for Gadot’s Diana Prince, as there will be plenty of action to keep him busy”. Well, he can be a mere love interest, I don’t mind. DC/Warner can treat him with the same relevance comicbook movies treat the hero’s average love interest~

Empire shared three new Batman V Superman: Dawn of Justice pics, showing the two titular characters and Lex Luthor~ I will share here the Batman one, because I still don’t like Jesse Eisenberg as Luthor, and because Superman looking so unhappy is also not my cup of tea. So here you have Batman in a cool looking armor because he sure as hell ain’t going to fight Superman with his regular suit. 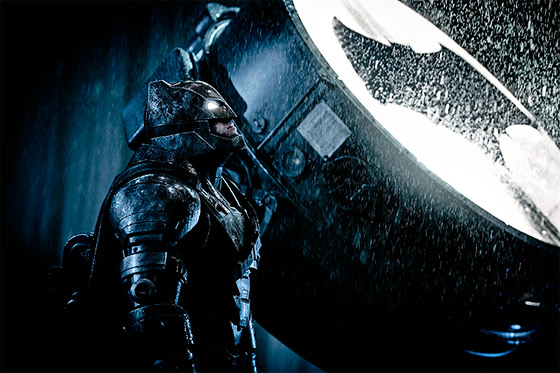 So yeah, Gambit with Channing Tatum is happening and the production kicks off in Louisiana from October 2015 to February 2016… and a huge-ass budget of $154,975,309. Well, that’s quite a lot considering it’s a first time for both a solo Gambit movie and Tatum as Gambit. Seems that $30 million of Gambit‘s budget will go to Louisiana employees, which include a lot of criminals, and not a single one I recognize from comicbooks. OK, it seems fair to have criminals considering Gambit’s profession before being an X-Man. Where are the mutants tho!

Here are some new Deadpool images, courtesy of Empire Magazine. Sadly, I will have to see Ryan Reynold’s face at some point. I hope it is a short flashback. Now here’s what Deadpool is supposed to look like: 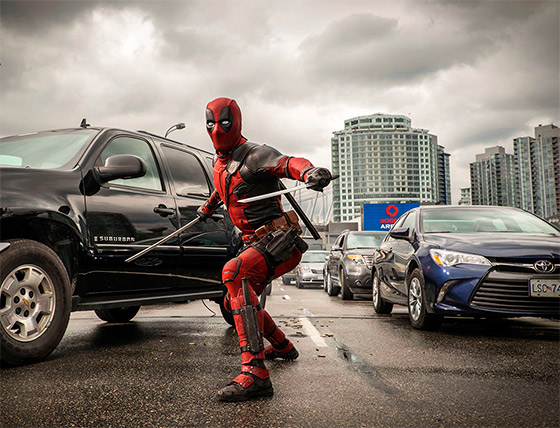 Former Daredevil showrunner Steven DeKnight talked about what we could expect from The Punisher in season two. Also, it won’t be as violent as former depictions of The Punisher before he came back to Marvel. Sure, there will be violence, but it won’t be R rated violence.

The first season of Daredevil was violent but I always say it was more implied. It wasn’t nearly as violent as The Walking Dead, a show that I love. On that, if somebody were to crush somebody’s head in a car door, you would’ve seen the head crush on-screen but we didn’t want to go quite that far. We wanted to keep it right around PG-16 and not go all the way to the R. I have no idea if they’re planning to push it that far next season but I would be surprised.

Showrunner Melissa Rosenberg talked about Jessica Jones, and how tonally different will be from Daredevil. And how Krysten Ritter got no breaks!

The one thing [where] Steven [DeKnight] has the advantage, his show was called Daredevil but Daredevil has an outfit. Charlie Cox can get a break once in a while. My show is called Jessica Jones. There is no mask. Krysten Ritter is the hardest working actress.

And talking about the Marvel/Netflix series, there’s a rumor that a Thunderbolts TV series might be done. For those unaware, Thunderbolts is a team made up mainly of villainous characters… kinda like Suicide Squad. Besides, many potential team members have been introduced in movies and TV shows (like Mr. Hyde, Crossbones, Absorbing Man, Grant Ward), and more are set to debut (like Baron Zemo, The Punisher, Elektra, members of The Inhumans).

He can be a real high school student. That’s why people love Spider-Man. He’s the most grounded, relatable of superheroes. And Tom can really do that. He captures that. And he can do a standing back-flip. He’s perfect.

Talking about high-school Spiderman, Marvel announced the new series Spidey, that features a teenaged Peter Parker living through his early superhero experiences, as part of All-New, All Different Marvel. Here’s what Marvel Editor-in-Chief Axel Alonso had to say:

Everyone remembers their first Spider-Man comic. Spidey aims to be perfect as someone’s first Spider-Man comic, or their one thousandth. We’re not looking to re-tell stories here. What Robbie [Thompson] and Nick [Bradshaw] have put together is an exciting new take on Spider-Man at his arguably most iconic incarnation, and will feel fresh to new and old fans alike. 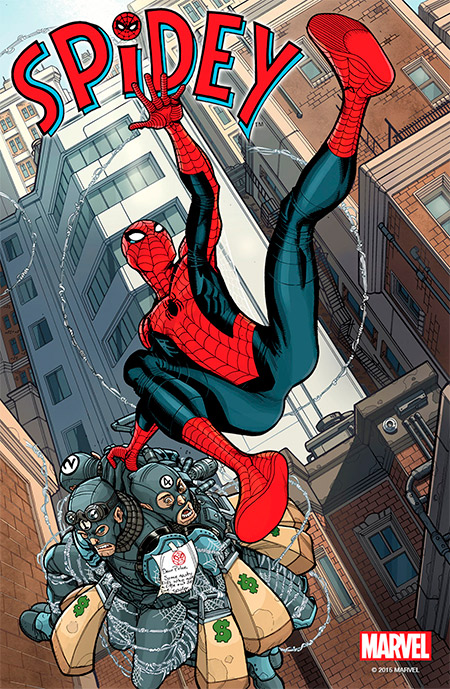