Greetings, fellow geeks! We have much news this week, much news about Marvel’s Cinematic Universe mostly~ Although other geeky stuff has happened all around, it was the constant flow of interviews and pictures of Marvel’s new projects that monopolized the week, and I loved it! 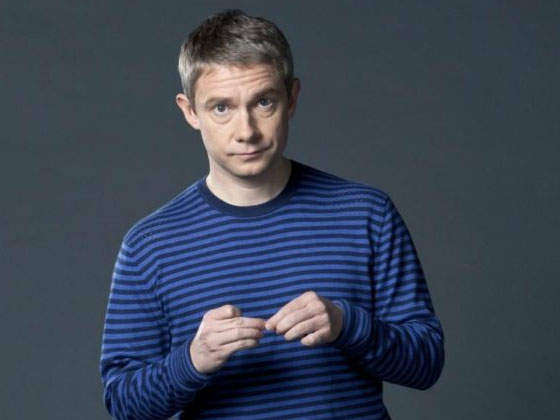 Let’s celebrate with lots of new The Hobbit stills!

Now onto the first of many bits of Marvel news~

Remember that Marvel Cinematic Universe: Phase One – Avengers Assembled box set that was made of beauty and geekiness? Yeah, Marvel and Disney were idiots and didn’t actually have the right to recreate that briefcase that belongs to a German luggage firm. Obviously, they sued. Now, the box set (with a new design) has been delayed until next year. Disney doesn’t want to deal with (more) rage from the geekdom, even more than the content and features that were first advertised. So yay, I guess?

And now that The Avengers DVD/Blu-ray will be available soon, new interviews with the cast keep appearing. This time it was Samuel L. Jackson’s turn, and he recalls, among other things, what Nick Fury was to him:

I’ve been reading the Fury comics since I was a kid. I remember when it was Nick Fury and his Howling Commandos in the World War II war comic books. That’s when I was introduced to him, and then I moved on. Then all of a sudden, I pick up an Avengers comic book and I was like, “Hey, that’s me!” It’s amazing. It’s great.

Then I found an interview with Chris Hemsworth, who pretty much, like Hiddles, saw a meteoric rise in his career since last year. He talks about all the movies he has done lately (Thor, Cabin in the Woods, The Avengers, Red Dawn, Snow White and the Huntsman and Rush). What caught my attention was his relationship with Joss Whedon, whom he met in Cabin in the Woods before he even got the title role in Thor:

When I was on set during Cabin In The Woods, he said to me, “Why the hell aren’t you playing Thor? Have you auditioned for that?” And I said, “I did a long time ago, but nothing really happened.” And he goes, “You should be Thor; this is crazy.” He ended up calling Kenneth Branagh and said, “You really should see this guy again; I’ve been working with him,” and he said some great things that kind of got me back in the room. Now, a couple of years later, here he is directing me as that character.

Now, let me show you how awesome some geeks are: 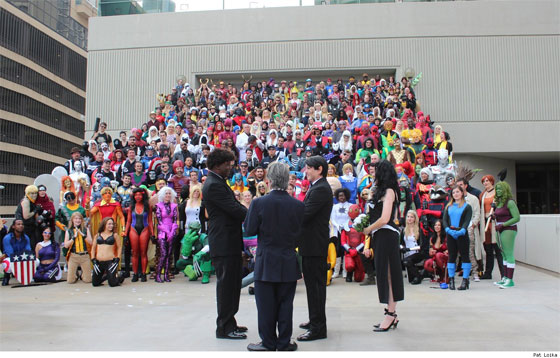 Yes, it is a recreation of Northstar and his boyfriend Kyle’s wedding, at Dragon*Con in Atlanta. The ones acting as groom and groom? An actual couple who have been together for 20 years. Aww.

In non-Marvel news, did you know Matt Smith was almost the Watson to Benedict Cumberbatch’s Sherlock? Yup, apparently, pre Doctor Who days, Mr. Adorably Clumsy auditioned for the part, altough Troll King Moffat thought he was better fit as Sherlock… sadly (for Matt, not for us), Benedict already had the part. Matt also added:

I thought my audition for Watson was very good. But clearly not good enough! Basically they looked at it and went, ‘He’s not Watson. It’d be like having two Sherlocks in the room.’

Well, I do love the contrast of Martin’s physique against Benedict’s. Having two tall lanky guys with “interesting” faces would have been too much.

On a different note, Star Trek sequel gets an official name: Star Trek Into Darkness. I do not like it much, but oh well~ I just want the trailer and stills, please! Also wanna know who the heck Benedict is playing.

Finally, James Cameron talks about Avatar‘s sequels (yes, two of them), which will be filmed back to back. But also talks about the possibility of a fourth one:

I have an idea for a fourth. I haven’t really put pen to paper on it, but basically it goes back to the early expeditions of Pandora, and kind of what went wrong with the humans and the Na’vi and what that was like to be an explorer and living in that world.