The Fangirly Diary of a Geek Girl: The wind of change~

Greetings, my fellow geeks. The Toronto Film Festival has started and with that my favs being all awesome promoting their movies. Also, some interesting casting news… and a retirement that left me with bittersweet feelings. Now this is how the week started:

Natalie Portman talked about her experience in Thor: The Dark World, and joins the prestigious club of actors who actually hit Tom Hiddleston to make it more realistic. Other members of the club are Chris Hemsworth and Jeremy Irons~

It was actually a punch. We did a few that were fake, but they could tell because I am just bad at that. (laughs) So there were a few real ones because they were like, ‘you are just a little girl, you really can’t hurt him’. So I don’t know, he acted like he could handle it, but I think I actually hurt him.

Anthony Mackie had a tad too much fun on his Falcon suit in Captain America: The Winter Soldier:

The funny thing about that was, every time I put on the costume I felt kind of invincible. So It was more trying not to get in trouble! I felt a little ridiculous at first because you’re a thirty-something-year-old man dressing like a cartoon hero, but after a while you start buying into it.

Iron Man 3 screenwriter Drew Pearce talked about how the state of Tony Stark at the end of the movie will “help” things going on at The Avengers: Age of Ultron

We take his arc reactor out, but I think we also make a pretty definite statement that he is Iron Man. And although Joss isn’t part of the process as such, he saw all the cuts of the movie, so I’ve got to assume he knows exactly what he wants to do with Tony in [The Avengers: Age of Ultron] and how we’ve left [Tony Stark] is going to help that, not hinder it.

He also said he does’t think DC is copying Marvel’s model at doing movies… Fox though, that’s another story~

Remember that back in the day Tim Burton was going to make a Superman movie with Nicolas Cage as Superman? Obviously it never happened, but here’s the teaser a KickStarter-funded documentary about it all~

BBC unleashes their 2013 drama trailer and I am excited! There’s also a tiny glimpse of Sherlock series 3~

So, Lou Ferrigno was telling everybody he’s the best Hulk eva!!!1! Nah, he’s just said nobody can play Hulk like he did. And considering all the other Hulks have been CGI, I guess he’s right… somehow.

The truth is, I’ve been the Hulk my whole life. The Hulk was the beginning of me, a platform as an actor to grow. I don’t think anybody else can play the Hulk like I could. I was able to show emotions even with all of the makeup. I don’t think it can be duplicated.

OK, Thor: The Dark World‘s production notes gave a lot of info and made me giddy! There’s Erik Selvig half naked in Stonehenge! Odin has a scene with Darcy! We get to see Volstagg’s family! And Malekith has a sense of humor!

I wanted Malekith to have a sense of humor, because I think a sense of humor indicates intelligence and if you’ve got an intelligent villain that means that your heroes have to be really accomplished to beat them.

TheOneRing.net had their hands on The Hobbit: The Desolation of Smaug Annual 2014, and gives away some goodies like many pretty pictures, including one of shape-shifter Beorn in bear form, and info on the movie! There are lots of changes to the book to make it more complicated and well, of course, or the whole thing would have only been just one long movie instead of three~

Pacific Rim finally reaches $400M worldwide and we get a first (small) glimpse at the Collector’s Edition Blu-ray. 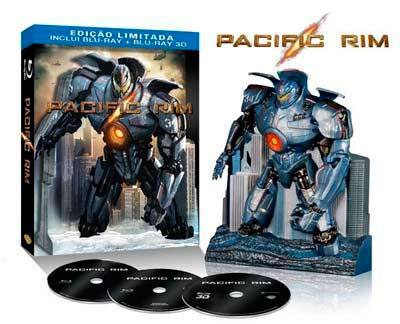