So I only managed to watch Elementary today (damn you, real life), but the episode was interesting if kinda predictable. So here’s the promo for next episode:

Thor: The Dark World finished filming in Iceland, and apparently there was a great battle between Thor and Loki. Well, I hope Malekith’s fight is bigger than this one, as much as I love Loki (and Tom Hiddleston), I don’t want him in the spotlight as main baddie again. I am ready for some Chaos Neutral Loki.

Oh wow, Matt Smith wants to do a Doctor Who episode in Peru. Yes, please!

I was really pleased to go to New York, for me it’s all about going to actual locations. I’d quite like to go back to America. I also think you could make quite a fun episode in Iceland or South America, or you could go to Peru. I’d like to film something in those places. The Pyramids would be fun, too, but I’d rather go to Peru.

He rates Peru over The Pyramids. Woohoo! Take note, Moffat!

BTW, Benedict, Martin and Sherlock won at the Crime Thriller Awards, and they all looked cute and dapper. Benedict also got to receive the Film award for Tinker, Taylor, Soldier, Spy. Here’s a dorky picture courtesy of Lara Pulver: 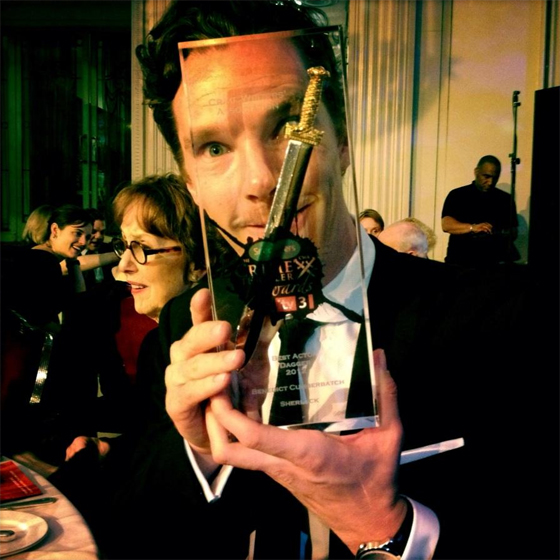 And still talking about the Sherlock people, co-creator Mark Gatiss will host a fundraiser for the London Lesbian & Gay Switchboard in November 11th at the Criterior Theather. Yes, practically all the Sherlock guys will be there answering questions for a good cause.

Something to watch on Halloween, Frankenstein: A Modern Myth on UK’s Channel 4 [1], where, amongst other things, we’ll see rehearsals and interviews with Benedict Cumberbatch, Jonny Lee Miller and Danny Boyle.

We might see a Deadpool movie soon according to Rob Liefeld, whom I dislike but who is, after all, co-creator of this fan-favourite. Now that Mark Millar is in charge with Marvel Fox, we might see a development in this project… which might get Ryan Reynolds still attached to it. Eh, nothing’s perfect.

Others who need to update their calendars are UK fans of The Hobbit: An Unexpected Journey, the movie will be released on December 13th, a whole day earlier! US fans are already green with envy.

That’s it for this week, but before I go we have Psy and Hugh Jackman doing the Gangnam Style, which just won’t leave the fandoms… here’s an excellent rendition of G1 Transformers dancing to Psy: