Greetings, my fellow geeks! The New York Comic-Con ended but gave me a reason for my shrill fangirl screaming. But there were two or three more bits of news that would make my poor abused throat squeak and squee some more. So, without further ado, this is how this week’s news made me sound like a dolphin:

OMG YES! COULSON LIVES! He will be in S.H.I.EL.D.! This was confirmed at the Marvel Television panel at the NYCC! And reading Clark Gregg’s Twitter, who was there at the panel, after the news was also glorious. The whole thing was quite theatrical, and it included tears, suspense and cheers! But, oh well, we all get what we wanted even if more details weren’t forthcoming.

There was also talk about Avengers Assemble and Hulk And The Agents Of S.M.A.S.H., which have officially been picked up by Disney XD, and while I’ll be forever bitter they cancelled Avengers: Earth’s Mightiest Superheroes, I’ll give these shows a chance. 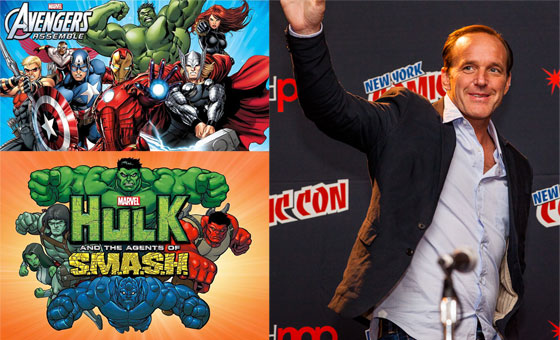 Well, there goes my free time~

The panel also showed us the trailers for the highly anticipated (for me) direct-to-DVD animated movies: Iron Man & Hulk: Heroes United [1] and Iron Man: Rise of Technovore [2]. Yep, we got two Iron Man animated movies! I am waiting more for the first one because of Science Bros, and because the Marvel anime shows haven’t been that good even if the animation was awesome.

In more comic book adaptation news, The Dark Knight Rises is getting the “For Your Consideration” Oscar treatment by Warner Bros. I am totally fine with it… except for that part where they push Anne Hathaway for Best Actress. Ok, she did a good job with Catwoman, but she is a Supporting Actress. I guess they didn’t want her to compete with herself if (when) she gets nominated for Les Misérables.

But my shrillness was renewed when I realized “Adventure Time With Fionna and Cake” will have a sequel in 2013, with an episode called “Bad Little Boy“, as part of season five, which will start on November 12th.

So, Benedict Cumberbatch rides a bike for a good cause and shows off his nice legs and thighs. He rode 45 miles from Buckingham Palace to Windsor Castle and got a sponsorship of £23,778, mostly from fans who wanted to help… and watch him in lycras. The Prince’s Trust also uploaded some picture of their Palace to Palace bike ride on their Facebook page.

Zachary Levi, a.k.a. “new Fandral” from Thor: The Dark World, has been prancing around Iceland with Tom Hiddleston after shooting time was over, and took a picture of Hiddles outside an awesome café called “Loki”:

Serving “mischievous” coffee and muffins since 1977.

And I got one last NYCC piece of news! Here’s a new Arrow reel, where we see John Barrowman’s character (yay), The Huntress (apparently), and not!Deadpool… Deathstroke, that is.