The Fangirly Diary of a Geek Girl: The most human

Greetings, fellow fangirls and fanboys! This was a week we had the Oscars and lots of news, including images of upcoming geeky movies and TV series. But the most important happening this week was saying goodbye to a man who shall be remembered by many generations of geeks. And so I dedicate this column to the great Leonard Nimoy:

We all knew The Powerpuff Girls was going to get a reboot, but now it’s totally official and it comes in 2016! Here’s part of Cartoon Network’s press release:

Slated for a 2016 launch, The Powerpuff Girls reboot will include an all-new television series produced by Cartoon Network Studios and a full licensing program slated to roll out across all regions. […] Emmy and BAFTA award winner Nick Jennings (Adventure Time) is on board as executive producer.

As of right now, we have yet to know if creator Craig McCracken will be involved in any way (I sure hope so!), or if it will be CGI like the 2014 special.

I said to my wife, ‘The moral is that I should never stop playing Wolverine. I’ve got to find a way to keep playing him until I die.’ I know that someday they’ll recast the role with another actor…I’d be happy if the role was eventually recast. It would mean that it had become iconic.

According to Deadline, Michelle MacLaren will direct Gal Gadot in Wonder Woman later this year (around October/November). Huh, last I knew about the movie it has yet to be greenlighted by Warner/DC. Must have changed then!

It’s rumor time! Taron Egerton (the awesome newcomer from Kingsman: The Secret Service) is one of the hopefuls for the role of Han Solo on the Star Wars spin-off! Not that I believe either The Sun OR Daily Mail, but Mark Millar was also being cheeky and tweeted about it.

Box Office Time! Kingsman: The Secret Service is still doing well and has kept its second place for the second week in a row. Not bad considering they were against Fifty Shades of Grey which, despite my general contempt, I gotta admit made a buckload of money.

So, before the Oscars, there’s the Razzies! And the biggest winners were Kirk Cameron’s Saving Christmas, Michael Bay and Megan Fox. Also, hey, Ben Affleck got a Razzie Redeemer Award! Congrats!

Also, yeah, the Oscars happened. Neil Patrick Harri’s jokes fell flat except for a couple where I actually laughed out loud, but there were some good speeches and music! There were almost no surprise reggarding the winners tho. And I spend most of the time zapping between the ceremony and watching The Hobbit: An Unexpected Journey dubbed in Spanish for the first time. So yeah, here’s a complete list of 2015 Oscar Winners and here’s a list of best and worst moments. But here’s my personal favourite moment:

So yeah, there were some quips about superhero movies (courtesy of Jack Black) on the Oscars, and then Nightcrawler director Dan Gilroy also bemoaned the “tsunami of superhero movies” during his acceptance speech at the Independent Spirit Awards; but James Gunn ain’t have time for that shaming and had some things to say on his facebook page~

If you think people who make superhero movies are dumb, come out and say we’re dumb. But if you, as an independent filmmaker or a “serious” filmmaker, think you put more love into your characters than the Russo Brothers do Captain America, or Joss Whedon does the Hulk, or I do a talking raccoon, you are simply mistaken.

OMG! Calista Flockhart will be on CBS’s Supergirl! She will play Cat Grant, who is sometimes Clark Kent’s love interest and entertainment reporter at the Daily Planet, will take on a slightly different and more awesome role in the TV series:

In CBS’ incarnation, Cat is the self-made media magnate and founder of CatCo. Cat started her career as a reporter and has built her company into a global powerhouse. Kara (that’s Supergirl BTW) works as Cat Grant’s assistant.

In comicbook news, here’s the cover of Thors #1 in the Battleworlds event. Yep, that’s a bunch of Thors! We have Throg the Frog of Thunder, Beta Ray Thor, Thor Stormborn and many more! Also, they are kind of cops now? Which is weird, since at least regular Thor is many things but a detective he is not~ Oh well, here’s what writer Jason Aaron has to say about this: 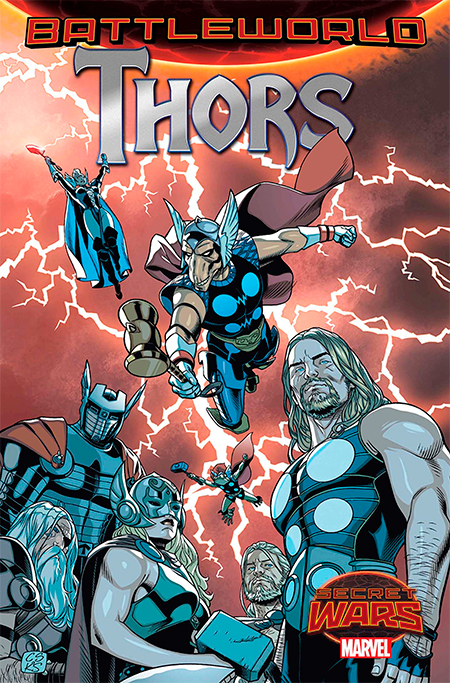 This is basically me doing a cop story, but with hammers instead of guns. It’s every version of Thor you can imagine, all walking beats, solving murders, getting yelled at by their commissioner and blowing off steam at their local Thor-cop bar.

I totally want to go to the local Thor-cop bar!