It’s the end of Marvel’s World as we know it! And I feel… kinda fine? Yep, over 50 years of Marvel universe will come to an end with the eight-issue limited series Secret Wars! You know, all these things they were teasing us for a while there. The first issue of Secret Wars will have the collision of the 616 and Ultimate Marvel Universes, both will get destroyed and we will have a Battleworld out of it which is made up of many different worlds. The “teaser” worlds. Senior Vice President of Publishing and Executive Editor Tom Brevoort confirmed that:

Once we hit Secret Wars #1, there is no Marvel Universe, Ultimate Universe, or any other. It’s all Battleworld. […] Every creative team has known this was coming. We’ve had a line of demarcation in the sand. Get your most immediate business done by this point because we’re going into Secret Wars and it’s going to have an impact on everything.

As for myself. I am holding it together just fine after my initial shock. I mean we could have Peter Parker, Gwen Stacey and Miles Morales all in the same universe! I just want to know my bae OneDirectiony Loki will survive!

So what’s the reaction of grandpa of all Marvel geeks, Stan The Man? He seems optimist and eager, that while he has an “emotional attachment to the original Marvel Universe” he didn’t expect it to remain static forever.

Anything they do that’s unexpected and different usually captures the attention of the fans. People will want to follow it to see what happens and where it will lead. Marvel cannot keep doing the same stories over and over again. You always have to come up with new angles and new approaches to things. I think it’s probably a good idea. It sounds intriguing to me.”

And what about the men who made Marvel storylines as we new fans are used to? Well, Gerry Conway and Walter Simonson are the “wait and see” kind of guy, and John Romita is grumbling a bit. Conway does have an excellent piece of advice for all the fans who whine about “ruined childhoods”~

I would say to them, no, your childhood is still your childhood. There’s a point to be made, and it’s a universal one: We have to see that there’s a difference between what people do today, and what they did yesterday. Yesterday still exists, those stories still exist. Now someone else is getting a chance at a new childhood. And that’s nice.

On the DC comic news, let’s talk about Batman with Superpowers! Yep, Batman is getting superpowers… again. For a while. Dude got infected with the Amazo Virus in Justice League #38. Artist Jason Fabok talks about how weird is to draw Batman with superpowers~

Artistically, trying not to give it away, it’s a strange thing to try to draw Batman with superpowers. I mean, we’ve seen him in the past where he might have gotten, like, a Green Lantern ring. And I’m sure, at some point, within the history of DC, he’s had superpowers for an issue or something. But as an artist, it’s strange to draw that.

Chanding the note a little bit, Mark Millar talked about the faith he has on Josh Trank for making a non-sucky Fantastic Four movie. Dude, I wish I had it too!

Josh Trank the guy who is directing it, is a really smart guy. He and I spent a wee bit of time together when I was first doing this job, about a year and a half ago. And, what I think Fox is doing is very clever. They’ll get a great director on board. Like, a lot of people trust the character and just think this brand is going to be fine. But you can’t trust the brand because the brand can be done badly, you know. But if you get a good director that is the cornerstone you build everything on.

Besides that we have a total confirmation of the Deadpool movie getting made. Yep, it will start filming this March, and we will get to watch it beginning 12 February 2016!

You know that Gareth Edwards’ Star Wars spinoff that may or may not be about bounty hunters hired by the Rebels to steal the plans of the first Death Star? Well, apparently testing for the lead female role are Tatiana Maslany, Felicity Jones and Roony Mara!

David Duchovny got asked about what he thinks of Fox’s plans to revive X-Files. He certainly doesn’t mind a revival, for a bit a least! His old bones are not what they used to be~

I’m assuming that it will happen sooner rather than later now. We’ll see what form, how many (episodes). Certainly I can’t nor would I be interested in doing a full season. It will be in some kind of limited form. We’re all old, we don’t have the energy for a full season. 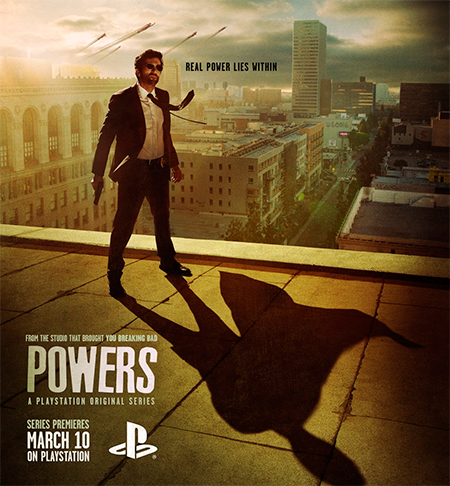 It is my honor and privilege to officially tell you that PlayStation will be releasing the first three episodes on March 10th followed by the debut of a new episode every Tuesday. The first episode will be free for everyone at PlayStation.com/Powers and the full season will be available free to members of PlayStation Plus…which you should have already because it’s awesome.