Greetings, my fellow geeks! Today was the day of Doctor Who series 8 premiere! As such we have had even more Peter Capaldi interviews throughout the week! We also have some casting news, rumoured and true, and some Harry Potter stuff, besides the usual DC and Marvel! And here’s how the week started:

Using Google SketchUp, and the very descriptive writings of author J.G. Ballard, here’s a curious video of the tower block where everything happens in High-Rise. It was mentioned on Tom Hiddleston’s twitter and was quite educative since I have yet to grab the book.

Also, we had another pic of Hiddles and High-Rise director Ben Wheatley!

And now for some rumors! First bad news, then good news, and finally mixed emotions news!

So, The Mirror claims that Jenna Coleman is planning on leaving Doctor Who after the Christmas Special. That’s certainly weird since she was all involved in the Doctor Who world tour. But apparently, “it was very much a mutual decision”, and her parting could make a “perfect Christmas storyline”. We’ll see.

Comicbook.com claims that Disney will release the unaltered Star Wars original trilogy on Blu-Ray. You know, with no extra VFX, no Hayden Christensen as Ghost Anakin, no different Boba Fett voice, Han shoots first, everything! And that’s great news… BUT! Some people think is too good to be true, and here’s the reason:

Disney doesn’t own Star Wars, The Empire Strikes Back or Return of the Jedi. Fox does. They also own the distribution rights to the Prequels. The rights to Empire and Jedi and the Prequels will revert to Lucasfilm (and thus Disney) in 2020, but Fox will retain the rights to Star Wars forever. In perpetuity. And they’ll never give it up.

And then, Devin Faraci of Badass Digest claims that Doctor Strange won’t be an origin story. That Marvel won’t do more origin stories. Which on the one hand is nice to spice up things, but on the other… non-geeks don’t know much about Doctor Strange, so the story must better be damn good to make people connect with the character!

So, for Dr. Strange they’ve had a script in-house forever. It is a pretty standard origin story for Doctor Strange. It’s got Baron Mordo as the bad guy. That’s all gone. Marvel’s new thing is no more origin stories. So, Dr. Strange movie no longer has an origin. It begins in medias res. It has Dr. Strange already established as the Sorcerer Supreme. It is a totally new script. Jon Spaihts is working totally new, On his own, without any of the previous stuff. Not even touching the previous script.

On more Marvel rumors, they say the after credits scene of Avengers: Age of Ultron “will lead directly into the events of Thor 3, teasing a Loki-led war between Midgard and Asgard, and the beginning of Ragnarok”. Yeah, I doubt that one. But I wouldn’t mind if it happens! I just want some Amora The Enchantress in it though!

In actually confirmed Age of Ultron news, Stellan Skarsgard confirms Erik Selvig will be there. Probably he will be there to explain something, and he might not be naked this time!

Anyway, Roberto Orci just finished the first draft of Star Trek 3‘s script! I wonder how will it be managed now that the crew will actually be in deep space for its mission voyage!

Hey, here are a bunch of on-set pictures of that awesome interrogation scene of The Dark Knight. There’s also part of an interview with Christopher Nolan about the scene from back in the day. 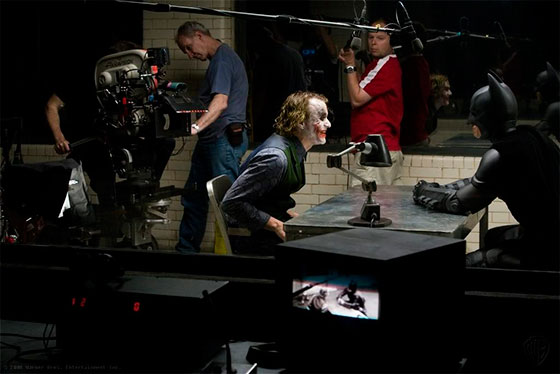