The Fangirly Diary of a Geek Girl: Strange new world!

Greetings, fellow fangirls and fanboys! This is the first column of 2016! And this week we had lots of first looks of the movies and TV series we’ll get to watch, courtesy of Empire and EW! Specially one for Marvel’s newest movie: Doctor Strange. Here’s how the week started:

The Doctor Who Christmas special titled “The Husbands of River Song” came and went, and the best thing we got out of it is that we got a proper closure for River Song (as well as the delight that was Peter Capaldi and Alex Kingston together). And man, was Alex happy to be there, and Troll King Steven Moffat so smug to have her back! Also, this lovely, lovely fanvid of River Song’s death (when we met her during David Tennant’s time as The Doctor), with added flashbacks of certain episodes of Matt Smith’s time and the “The Husbands of River Song”.

Tom Holland talked about his Spider-Man movie and how being in Captain America: Civil War helped him as an “eye-opener” as how his solo movie will be like~

Captain America: Civil War will be a brilliant movie, a huge movie and I’ll have the support of the success of that movie so that I can go on to my own. It was also a real eye-opener to what it will be like when I start my film. I think the problem with Civil War for me was that it made me 10 times more excited to start on Spider-Man, but we don’t start for months so I’ve got to sit on that excitement for the moment.

Star Wars: The Force Awakens keeps breaking Box Office records, like blasting past $1 billion globally faster than any film ever, and you know why? Because of repeat viewers… and increased interest among women and minorities! Yeah, Disney, thank me! I am both a repeat viewer AND a minority woman. Disney distribution president Dave Hollis said this:

The speed with which records are falling is a testament to the audience broadening out. And you can’t do these kind of numbers without extraordinary repeat business. We know anecdotally people are seeing it three and four times. Everyone wants to be part of something that has become a cultural phenomenon.

Here’s a list of the Top 10 Pirated Movies of 2015. I have seen all of them at the cinemas yay! Except for Fifty Shades of Grey, because no thanks.

Entertainment Weekly dropped the first bomb of the week, revealing their Doctor Strange cover that gave us our first look of Benedict Cumberbatch as the titular character. It was just the beginning, since this was, after all, EW’s First Look issue! 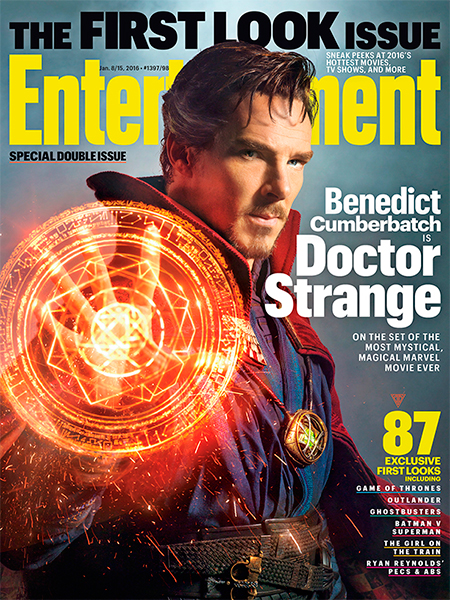 As for Benedict Cumberbatch, he’s feeling a bit self-conscious about finger positioning on his rune casting, but he does promise that “there’s going to be crazy s— going on”~ I do hope so!

We are also promised we will be tripping balls, according to Marvel Big Boss, Kevin Feige. Yay for psychedelic aesthetics!

The images can be just as trippy — for lack of a better term — as those Ditko images were in the past. So, that, we hope, is going to set this movie apart from any of the other movies. And, from any other movie.

We also got some “exclusive photos”! Those include some concept art that show us the Sanctum Sanctorum, Stephen Strange’s three-story townhouse in New York; as well as the aftermath of Strange’s accident, which renders him unable to use his hands for surgery and drives him into the mystic arts. 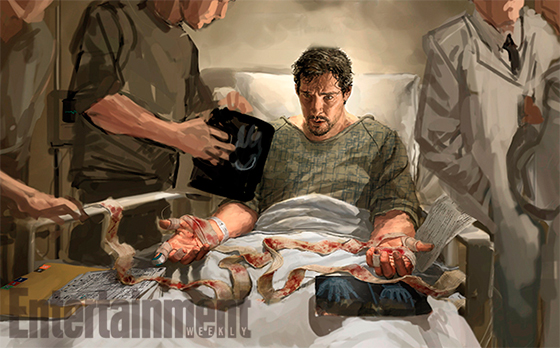 There was also talk about Mads Mikkelsen as the main villain in Doctor Strange. Many names have been thrown, but is he exactly playing? Yeah, Feige ain’t saying yet, but he does say this:

Mads’ character is a sorcerer who breaks off into his own sect. [He] believes that the Ancient One is just protecting her own power base and that the world may be better off if we were to allow some of these other things through.

So, what comics sold best in 2015? Mostly Marvel’s! They got 7 out of the Top 10 titles! Must be all those Star Wars comics. And that includes the female lead comic Princess Leia No. 1. But Marvel also had another female lead comic, Spider-Gwen No. 1! 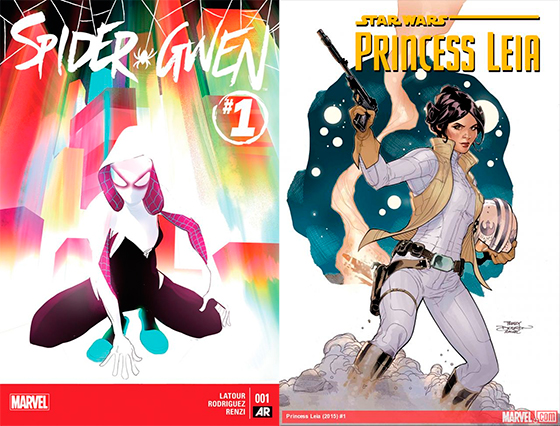