Greetings, fellow fangirls and fanboys! This week we have lots of new Rogue One info (and pictures!), courtesy of Entertainment Weekly. Also, casting news, first looks, teasers and more! Here’s how the week started:

In a fine example of the pot calling the kettle black, Roland Emmerich thinks superhero movies are silly, while talking about Independence Day: Resurgence~

When you look at my movies it’s always the regular Joe Schmo that’s the unlikely hero. A lot of Marvel movies, they show people in funny suits running around. I don’t like people in capes. I find it silly when someone dons a superhero suit and flies. I don’t understand it. I grew up in Germany, that’s probably why.

So, the E3 came and went, and IGN made a helpful list about the most relevant stories of the event. The one I cared the most is Hideo Kojima’s triumphant return with Death Stranding, with naked Norman Reedus, dead marine life, a dissapearing newborn baby… and it’s that a C-section scar on his abdomen? Is Norman Reedus’ character transgender?! OK, wishful thinking, but there can be miracles when you believe and stuff~

Finding Dory has broken the domestic box office opening record for animated movies with $136.1 million. The previous record holder was Shrek the Third, which opened to $121.6 million back in 2007. Finding Dory earned $186.1 million worldwide though, which is not nearly enough to claim the record from Zootopia, which brought in a massive $233.9 million worldwide in its opening weekend.

Despite a lukewarm reception in the US of A, Warcraft has now become the most financially successful video game movie ever, and it’s totally thanks to China. They gave it over $200 million, and so the film got a global haul of $377.6 million. That might not be as much as Legendary Pictures and Universal wanted, but enough to justify sequels, I guess. Hopefully, the sequels will be better.

Talking about hopeful sequels, Dredd, arguably the only good remake in recent years, might finally get the long awaited sequels. Karl Urban revealed at his panel at Denver Comic Con, that Dredd 2 is in development.

On more great news, Noomi Rapace has officially joined Alien: Covenant! OMG, finally! But the lateness in joining the cast may mean her role is smaller than I hoped for (as in The Adventures of Dr. Shaw and David’s head). Maybe in flashbacks?

Here we have 11 more Suicide Squad character posters, and these might be my favourite of all released ones. Here we have The Joker and Harley Quinn: 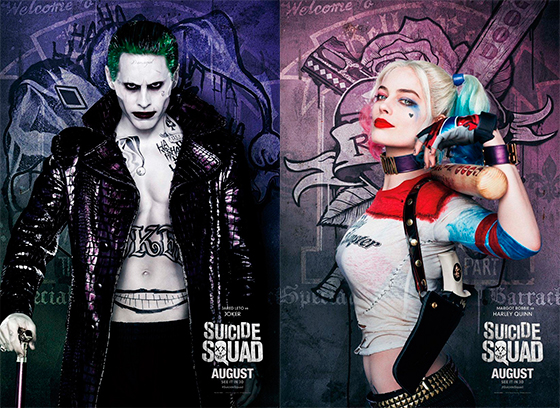 Welp, that season finale for Penny Dreadful where Eva Green’s Vanessa Ives died was actually the series finale. Yep, the show’s not returning for Season 4, confirmed EP John Logan in this long (and quite interesting) interview:

Because Eva Green is my muse for this show. And Vanessa Ives is my muse for this show. Her story had to end exactly as it ended for me. Would I have loved to keep telling her story for 10 years? Yes. But that would’ve been an act of bad faith. Vanessa’s struggle had to end, and it had to end in peace. That’s what the series was about for me. And as much as I love the other characters and the other actors and running this show, the central ticking clock of it was always Vanessa Ives.