The Fangirly Diary of a Geek Girl: Step into the spotlight!

Not much to report this day, except for the freaking adorable bunch of Wonder Woman figures courtesy of Funko! We have Diana in all the different outfits she wore in the movie… and this cute 2 pack with Steve Trevor:

Entertainment Weekly gave us our first look at Mary Poppins Returns, with a cover and a bunch of lovely behind the scenes pictures… and then of course someone had to photoshop Yondu on that cover because he’s “Mary Poppins, Y’all!” to the approval of both James Gunn and EW’s team (they still prefer the Emily Blunt version, mind!). 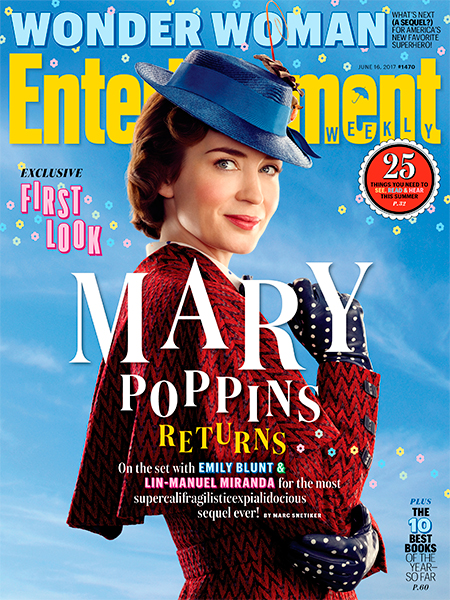 Keeping up with the cool ladies, Letitia Wright talked about her role as Shuri, sister of T’Challa, in Black Panther:

She’s princess of Wakanda, but also she designs all of the new technology there. She has an innovative spirit and an innovative mind, and she wants to take Wakanda to a new place. Also, she has a great fashion sense, better than mine. She’s so vibrant; a beautiful spirit, but also so focused on what she does. And that’s good for other people to see, especially for young people to see, because it’s like, “Look, there’s a young black girl who loves technology and she’s from Africa.” It’s something refreshing.

But now let’s talk about the most important women in Wonder Woman’s life: General Antiope and Queen Hippolyta. Diane Nielsen confirmed she and Robin Wright will return for Justice League. I mean, we knew there will be Amazons, a battle in Themyscira was briefly shown in the trailer. I guess it’s a flashback scene, unless they are already reviving people in the DCEU.

Wonder Woman director Patty Jenkins has yet to actually sign on to helm the sequel. Yep. The Hollywood Reporter previously said she was contracted to return, and then they published another report to clarify the situation. Warner didn’t expect the movie to be so succesful, and thus when the negotiation starts Jenkins will have way more leverage. Get that money, gal. And also, get a seat at the big boy’s table to check the development of the DCEU if you please.

Talking about the DCEU, there may be even more proof that unlike Marvel, these guys ain’t thinking things through. Considering the revolving door of directors for The Flash, and no more news of moving forward with Gotham City Sirens, Suicide Squad 2, and The Batman yet; it’s quite surprising to know that The Hollywood Reporter claims that Justice League Dark and Batgirl are “the likely next movies to go into production in the DC Comics universe”.

In the X-Men side of things, an audition tape apparently revealed that The Shi’ar Empire might appear in X-Men: Dark Phoenix. Guess Fox is ready to take the franchise in a cosmic direction. Not sure how will they manage that and not make it underwhelming in just one movie. I mean they may not appear in a lot of comicbook issues during the Dark Phoenix saga (or the 90’s animated series version), but they were an interesting part of the narrative and I want them depicted right dammit. Specially since in the movie Jean Grey has always had the Phoenix Force? And what about Lilandra and Charles!