The Fangirly Diary of a Geek Girl: Shall we begin?

Greetings, my fellow geeks. While The Hobbit is ahead in ruling the Geek World, another franchise has begun its move. Yes, Star Trek is back in the game. But let’s not get ahead of ourselves, lots of other geeky stuff happened too!

Hobbit month has officially started, and I spend my first afternoon of December watching all the videos The Hobbit: An Unexpected Journey press conference & premiere in Japan.

Some clips from Les Miserables! I am still not convinced by Russell Crowe’s Javert… but OMG Eponine! My heart goes to you, girl!

Ben Kingsley (The Mandarin) is the mouthpiece. Guy Pearce (Aldrich Killian) is the brain. I’m the muscle.

OK, I already saw this, but I don’t care ’cause know I can take a better look now! First, the blueprints of all 5 mechas (ok, Jaegers~) from Pacific Rim in HD. And the Smaug TV spot from The Hobbit: An Unexpected Journey:

So I guess the dragon does briefly appear in the movie. I doubt we’ll be hearing Benedict Cumberbatch in it, though.

Confirmed! There will be a Doctor Who 50th anniversay special! Yes, we already knew it was going to happen, but it is still nice to have it in a formal announcement.

Drama on BBC One takes another big leap in 2013 in the shape of some major event dramas, including The Village, Ripper Street, Luther, The White Queen and the Doctor Who 50th Anniversary Special. These shows will bring a rich range of tones and worlds to BBC One’s fiction.

The weekend ended with the best things that came out of Tumblr. Let me present to you The Hawkeye Initiative! As artist Gingerhaze explains:

How to fix every Strong Female Character pose in superhero comics: replace the character with Hawkeye doing the same thing.

And that’s exactly what it is! Check them up here. But let me give you a taste of it: 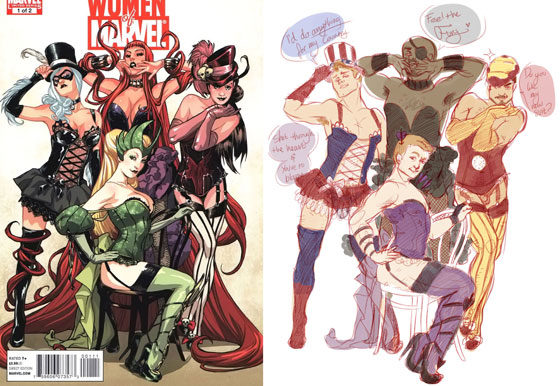 Man, I really need to draw one of these!