The Fangirly Diary of a Geek Girl: Secret convergences!

On this day of Marvel Summer 2015 preview, a frankly boring-looking teaser debuts. But as boring as it looks, the message is ominous! “Everything Ends”?Does this Secret Wars event will mean a reboot like The New 52s? Or maybe just the end of the Ultimate Universe? If so, 616 Universe (the regular one) should adopt Miles Morales~ Frankly I hope not. And whatever they do, I also hope it is better managed than DC’s reboot~ 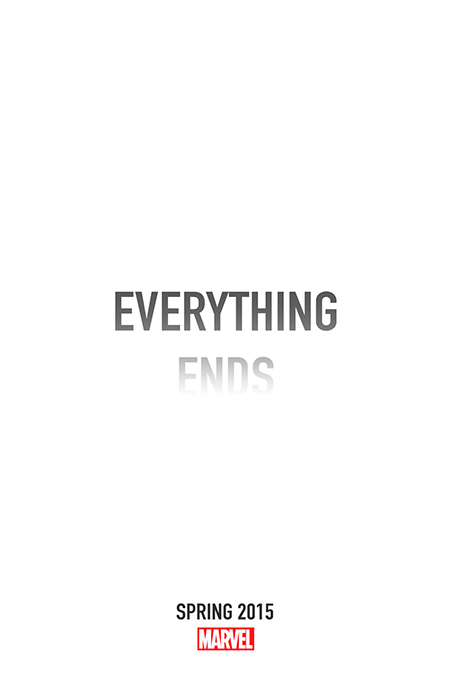 So, it’s the time for Joss Whedon to talk about Avengers: Age of Ultron, and of course the MCU announcements of last week.

You know, it is a little daunting, and you sort of go, [mock-whiny] “What about my movie? I haven’t even been born and you already like my younger siblings better?” But at the same time it’s exhilarating. It’s really fun to see where Kevin’s taking it and to see the workings of that mind. I think it was a very canny and very human move, I really like the slate.

Should he receive an email from me, there might be an attitude of scold.

As you may be aware, Batman: The Complete Television Series is a DVD/Blu-Ray collection about the beloved campy 1960s series with Adam West as Batman. And here, Warner Bros decided to regale us with a video of a side-by-side presentation of the same scene before and after the restoration.

ABC premiered the Marvel: 75 Years, From Pulp to Pop! special, and with it we had a brief glance at Avengers: Age of Ultron and Ant-Man. You can watch it here if you live in the US. Also, obsessed geeks with eyesight that rivals Hawkeye saw what seems to be The Vision in those few seconds. Here are some stills~

OK, while most of us are happy that we are getting a Captain Marvel movie, many of us also wonder why we cannot back Captain Marvel and Black Widow movies. In fact, the hashtag #blackwidowmovie has been doing its rounds on twitter. The latest one to join the clamour is Nathan Edmonson, the writer in charge of Black Widow’s ongoing comic book since the beginning of this year. He has written and published a six-page opener for a Black Widow movie. And looks pretty good and offer a small taste of what we could have. Come on, Marvel!

Habemus premiere date for Agent Carter! The show will premiere on ABC Tuesday, January 6! And after the eight episodes, Agents of S.H.I.E.L.D. will be back~

Also, Marvel has gifted us with an extended sneak peek! In here we can see Howark Stark, played by Dominic Cooper, talking with Peggy Carter, played by Hayley Atwell. We also get to see James D’Arcy as Edwin Jarvis (yes, the guy Tony Stark named his AI for) and Peggy kicking serious ass! It’s glorious~

“I can’t believe it,” Snicket said from an undisclosed location. “After years of providing top-quality entertainment on demand, Netflix is risking its reputation and its success by associating itself with my dismaying and upsetting books.”

You know how Quentin Tarantino’s first script of Hateful Eight got leaked, and the movie almost doesn’t get made? Well, now Tarantino and Weinstein ain’t taking more chances, and there are “extreme security precautions”. Like having possible investors reading the revised script only at The Weinstein Co’s Beverly Hills while being supervised by staffers. Paranoid much, guys?