The Fangirly Diary of a Geek Girl: Secret convergences!

Greetings, my fellow geeks! Marvel and DC are readying their newest comic book events and it seems they may have things in common! Besides that Disney is at it again with new info on their properties! But first, let me tell you how the week started~

The repercussions of Marvel’s announcement for their whole movie line-up until 2019 are still being felt. Captain Marvel writer Kelly Sue Deconnick was amongst those who were surprised and excited to know the MCU plans. Specially because of, obviously, Carol Danvers~

I was gobsmacked. I did not see that coming, and I would have bet high dollar against it. I could not be more thrilled to be wrong. […] The only thing I know [about the movie] is what [Kevin] Feige said at the announcement, which is, she’s an Earth-based Carol who has cosmic-based powers. So the tone of the film is very much up in the air. It’ll depend, I’m sure, on the screenplay, what direction they want to go with it, and the vision that their director has. There’s a lot of different ways they could go with Carol. I have every faith that they’ll do well by her. The films have been utterly fantastic. But without knowing anything about the film, the only thing that I could say that’s new is, hey, yeah, female protagonist. I could not be more excited about that.

OK, so Doctor Who‘s Series 8 finale started with “Dark Water”, and now we know who Missy is. The episode was intense and dark, even if I am kinda pissed at Moffat who doesn’t know the difference between gender and sex. That said, damn, just looking at the promo, things are going to be even more intense! So, yep, feast your eyes in the preview of “Death In Heaven”~

Guardians of the Galaxy keeps bringing the money! It has now become 2014’s second highest grossing movie! After that Transformers movie. Of course, a couple of heavy-hitters are yet to premiere, like The Hobbit: The Battle of the Five Armies and The Hunger Games: Mockingjay Part I. But not bad for the movie many thought will be Marvel’s first flop. Ha! In your face, non-believers! Marvel prints money now, and you will deal!

Idris Elba doesn’t care about Marvel’s snipers and just told everyone that he and Tom Hiddleston will be in Avengers: Age of Ultron. The scene will probably be small or maybe an after credits scene, but still! Damn, Idris is a stone cold fellow! Seems he also was fed-up with Heimdall’s costume in re-shoots, specially after being Mandela for a while~

I’m in Avengers, and I’m doing a scene with Chris Hemsworth and Tom Hiddleston, and they’re like, [whispers] – ‘Aren’t you [meant to be] in Ibiza?’

Comicbook news! Let’s start with DC’s next big event: Convergence! So what’s that about? Well, DC is about to put their entire line of superhero comic book on a two month hiatus. Yep,  the events of Earth 2: World’s End and The New 52: Futures End will spin out into Convergence, a nine-week “meta epic” miniseries starting on April 1.

The alien supervillain Brainiac has trapped cities from various timelines and planets that have ended, brought them in domes to a planet outside of time and space, and is now opening them for a great experiment to see what happens when all these folks meet.

Yep, that, and we got a new big bad, called Telos. 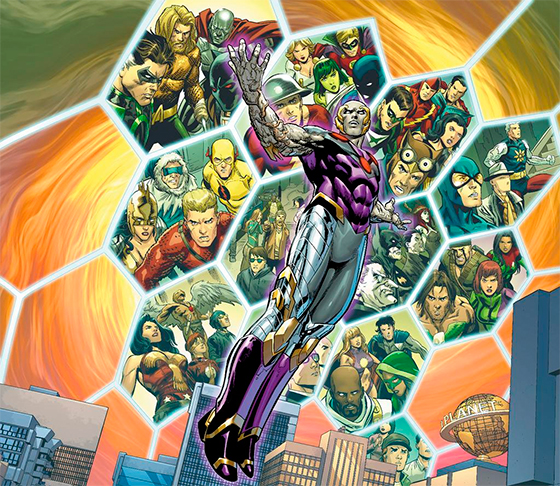 On the Marvel side of things, we have the latest preview of Marvel’s very busy Summer of 2015~ And, you know what? It’s something that gets me very excited in how “blast from the past” it is. Behold! X-Men ’92! Yes, it depicts the team of the beloved animated series from 1992 to 1997. You know, the one that made me realize X-Men existed and was my “gateway drug” to all things comic books, specially Marvel comic books. OMG now I have the theme song in my mind and I’m going to cry! Jean-Grey and Beast are missing tho! Such a travesty! 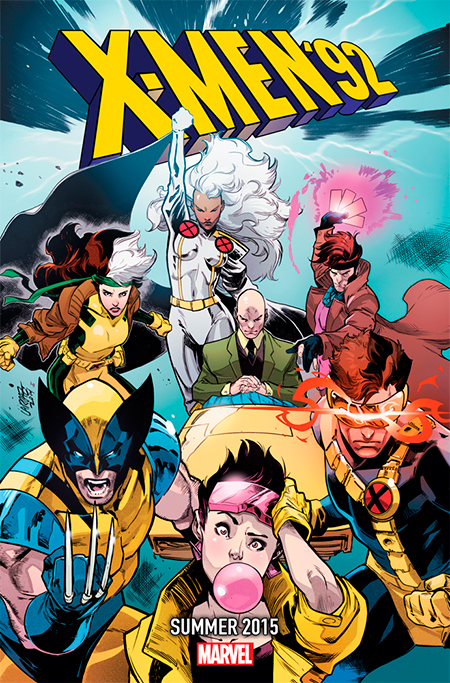 OK, Marvel also keeps bringing female-lead comics, and here’s the preview Angela: Asgard’s Assassin! You know, Angela, the former Spawn character who had her Marvel debut as a member of the Guardians of the Galaxy, but it’s actually Thor’s long-lost sister according the events of Original Sin? So here she is with her own series, written by a favourite of mine Kieron Gillen… and also Marguerite Bennett who is a good comic book writer too. And while I don’t like pointless armor (and her’s is basically a metal bikini), she’s so badass I can’t hate. Yes, look at her luscious locks and pissed off face. Also, yay for Skottie Young’s variant cover! 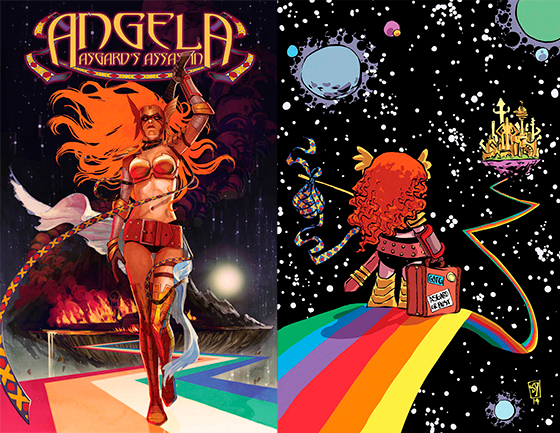 Back to reactions of Marvel’s recent MCU announcement, here’s Chadwick Boseman all happy because of the positive way he was received~

The reaction on stage at the El Capitan Theater was, like, amazing. The way that Marvel set it up and wanted to surprise people with it, it was one of the best surprises that I’ve ever been a part of. I’ve heard from a lot of my friends, and a lot of people I don’t know have congratulated me — but I’ve actually not heard a lot from other people because I went away. I tried to get away from everything just to ground myself. But it’s been amazing. I’m so excited! I’m ready to start right now, and they’re telling me, ‘Slow down a little bit!'”