Happy Birthday, Mickey Mouse! Here’s a clip of the short film Get A Horse!, which will be shown before Frozen.

We get more Sherlock tie-in books! Well, OK, this are actually new editions classic Sherlock Holmes stories and with Martin Freeman and Benedict Cumberbatch on the cover, and introductions by Mark Gatiss and Steven Moffat… but still!

Chris Pratt talks about Guardians of the Galaxy, and how it will be fun but it will contain The Drama! I guess that’s normal for a Marvel movie right? Although, this looks more fun that it should be allowed if that preview is to be believed. I want that movie now!

We have known for a while that Barry Allen will debut on CW’s Arrow. And here are the images to prove it. That said, The Flash won’t debut on Arrow, as we all thought. Nope. Instead of appearing as such in Episode 20 as was expected, CW opted to make a more traditional pilot in order to see Barry Allen on his red costume. Don’t mind if the do actually.

Here’s a 6-minute-clip of Princess Kaguya, the new Studio Ghibli animated movie based on The Tale of the Bamboo Cutter. It practically tells you the whole movie so SPOILERS if you don’t know what the legend is about. Also, it is very pretty! The film opens in Japan on November 23.

Marvel has variant covers with cute animals. And I mean it when I say cute! These are the ones that have been released, but we will get more since they told us that “each All-New Marvel NOW! launch, be it a new #1 or a .NOW issue, will feature a Marvel Animal variant”. Yay! 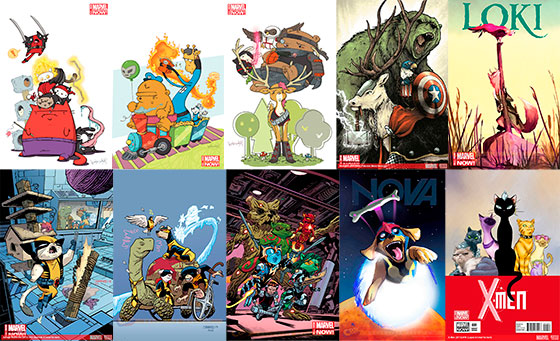 Now it’s the turn of Zoe Saldana to talk about Guardians of the Galaxy. She seems very giddy and confident in it, and that makes me happy. I want Marvel to keep slaying!

I never like to shoot myself in the foot to seem that confident that I may come across as arrogant, but I’m rooting for it a great deal because it was amazing. What we shot and what we left on the screen there were pretty amazing things and I hope, and I have a feeling, that James is going to capture it very beautifully.

Edgar Wright talks about what he wants for his Ant-Man movie, which, as Marvel movies are, will have action and fun times!

I want to make him into a badass [laughs]. No, I always liked that comic and I always thought it would be an interesting thing to see in live-action. That’s why I [showed] that Comic-Con test that we did for Marvel, to show this fight scene like a proof of content, like this is what the action is going to look like.

Back to Arrow news, Oliver Queen finally gets a mask! Next step, the epic beard! About the design itself, the prerrogative was, keep it simple!

A lot of our early attempts were very, shall I say, Joel Schumacher-esque. And it was really Greg [Berlanti, exec producer] who said not to overcomplicate it. And I think what’s so wonderful about the design that Maya came up with is that it really is very simple, and it feels as if it’s been part of his costume since the beginning…once we finally had this mask and put it on Stephen [Amell], even Stephen was like, ‘This is the right one.’

Yeah, remember that not-that-great-but-cool book that Guillermo del Toro (and Chuck Hogan) wrote called The Strain? FX wants a 13-episode series out of it, and so it will join all the other projects del Toro is currently working at. Also, he’s totally directing the pilot. The Strain is about vampires by the way, very different and kinda gross vampires~