The Fangirly Diary of a Geek Girl: Return of the Ladies

OMG! Our prayers were heard! We will finally have female LEGO minifigs who are also scientists! The sets were the winner of the latest LEGO Ideas, which lets us submit and vote on ideas for new sets. Dr. Ellen Kooijman, who designed and submitted them, said the following:

As a female scientist I had noticed two things about the available LEGO sets: a skewed male/female minifigure ratio and a rather stereotypical representation of the available female figures. It seemed logical that I would suggest a small set of female minifigures in interesting professions to make our LEGO city communities more diverse.

Here’s an early review (and description) of Guardians of the Galaxy… It is spoilery so read at your own risk. That said, OMG it sounds awesome! Not perfect, mind you, but awesome! And Marvel definitely went there! OMG!

Apparently what it’s supposed to be a How To Train Your Dragon trilogy could turn into four movies. At least that was DreamWorks Animation’s head, Jeffrey Katzenberg, suggested to both the director and the composser. The director Dean DeBlois also talked a bit about how it would all end and tie it to Cressida Cowell‘s original books. And it will be a punch in the damn gut.

In exactly one month, Sailor Moon Crystal will premiere. Here’s a trailer!

I’m telling you when I heard “Moon Prism Power! Make Up!” I freaking shivered!

OMG! Lauren Faust, who we have to thanks for My Little Pony: Frienship is Magic, will direct Medusa for Sony Pictures Animation. What’s Medusa you may ask? Well, it’s just a freaking original comedy about the notorious snake-hair lady from Greek Myth! OMG! And the description! OMG I want it now!

Medusa is filled with so many of my favorite ideas to work with: magic, mythology, humor and strong, funny, extremely relatable characters.[…] In our story, we meet Medusa as a young human, who, like so many of us, is overwhelmed with trying to fit a certain mold to please others. Her resulting popularity ticks off the wrong Goddess who turns her into the snake-haired monster we all know and fear. Medusa sets out on a quest to reverse this curse with the help of a goofy team of oddball and misfit mythological creatures who help her learn that what makes you different is, in fact, what makes you strong.

In other news, Game of Thrones is HBO’s most popular show ever. Yep, it finally won over The Sopranos. It’s latest average gross audience was of 18.4 million, and The Sopranos’ was  18.2 million.

Here’s the first look of The Imitation Game where Benedict Cumberbatch will be in a war (yep, there’s a pattern here), but will also tear my heart appart with the biography of Alan Turing—the British mathematician who deciphered Nazi codes during WWII and was later prosecuted for being gay. 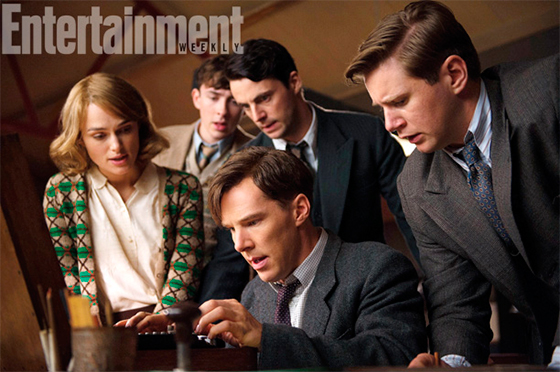 So, remember when Tom Hiddleston wrote that lovely piece about Superheroes and why they matter for The Guardian? Well, apparently it was so well written that it was used in the English GSCE exams. Here are the exhibits A, B, C and D. For those of us not from the UK (or anglophile), the GSCE are a national set of exams taken at about the ages of 14 to 16.