So yeah, Colin Firth is not the titular voice of Paddington Bear anymore. Did he mind the Creepy Padddington meme? Nah. Apparently he realized his voice wasn’t right for the character and it was an amicable parting. While I was never sure about his voice for Paddington, his statement made me kinda sad to see him go.

It’s been bittersweet to see this delightful creature take shape and come to the sad realization that he simply doesn’t have my voice. I’ve had the joy of seeing most of the film and it’s going to be quite wonderful. I still feel rather protective of this bear and I’m pestering them all with suggestions for finding a voice worthy of him.

On better news, Meryl Streep will play Maria Callas in Master Class Movie. Because of course. Yes, that’s exactly the title of the article and it couldn’t be any more accurate~

Now check out those jolie laide villains of Gotham!

At CineEurope, Paramount Pictures shared their plans for the future~ Of those I care about we have Terminator: Genesis (with Arnold Schwarzenegger) and Mission: Impossible 5 (with Tom Cruise) for 2015. For 2016 we have Transformers 5, GI Joe 3, Star Trek 3 (directed by Roberto Orci), Ben Hur (yep, Ben Hur, directed by Timur Bekmambetov), Hansel and Gretel 2 (yay!) and The Bourne Legacy (with Jeremy Renner), which was delayed August 14, 2015 to July 15, 2016.

Also at CineEurope, Disney talked about all of their franchises, including Star Wars, Marvel films and Pixar~ So, we had R2D2 giving a message from J.J. Abrams who couldn’t be there since he is still filming Star Wars, then they showed the first footage from Avengers: Age of Ultron (and the meanies at The Hollywood Reporter didn’t describe it), and a small interview/montage about Ant-Man~ Finally, there was some footage from Pixar’s Inside Out.

Oh yeah, we’ve got a scriptwriter for Doctor Strange, possibly. Marvel is allegedly in talks with Jon Spaihts for the job. Dude is currently working on is writing Universal’s The Mummy reboot, and was the writer of the first draft of Prometheus. Also, the shortlist of Doctor Strange titular actors are definitely/maybe Benny Batch, Tom Hardy and Jared Leto. I am still not sure about any of them.

I wanted it really bad. More than any other project that I’ve gone after, I felt compelled to do everything in my power to get on that project. Genuinely felt like I was the right guy to do it.

There’s going to be a Django/Zorro crossover. Yep. Django/Zorro will be co-published by Dynamite and DC Entertainment, and is slated for release in late 2014. The guys writing are  Reginald Hudlin, Django Unchained producer and writer of the comic adaptation, and the well-known writer/artist Matt Wagner who has written Zorro for Dynamite Entertainment before. Also, Tarantino himself is co-plotting and he is very very excited~

I’m very very excited about both this story and the opportunity to work with Matt. It was reading his Zorro stories that convinced me what a good idea it was to join these two icons together. And the story idea we came up with is thrilling, and I think will be an exciting new chapter for both characters 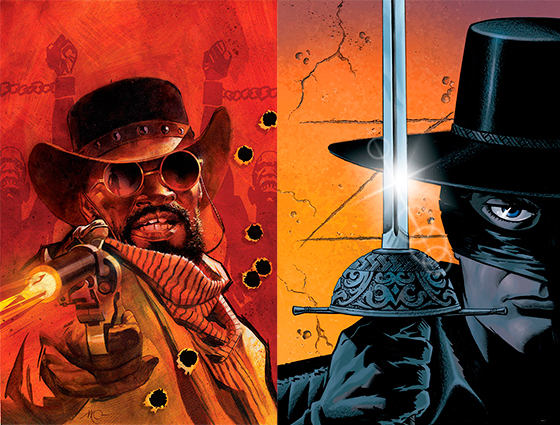