Here’s the first official image of Peter Capaldi as The Doctor. He’s still wearing Matt Smith’s Doctor get-up though… and he’s wearing it better~ But give us the new costume, Moffat! 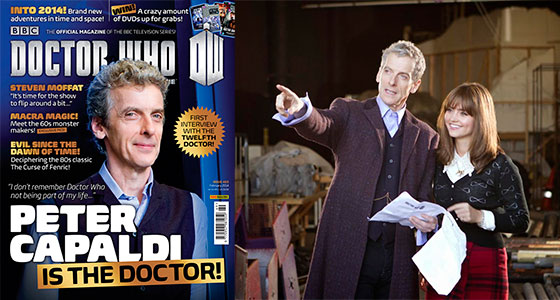 Oh yeah, he’s also on the cover of this month’s Doctor Who Magazine; and left us this nice quote~

I was five when the show started. I don’t remember Doctor Who not being part of my life, and it became a part of growing up, along with The Beatles, National Health spectacles, and fog. And it runs deep. It’s in my DNA…

Talking about BBC productions, Moffat talked about his desicion to include Benedict Cumberbatch’s parents in Sherlock as, well, Sherlock’s parents. Yep, he’s very tongue-in-cheek. No straight answers from that Troll King!

Well Sherlock largely runs on nepotism. I’m married to the producer, one of the execs is my mother in law, Mark and I are old, old friends, Martin (Freeman, who plays Watson) is working with his partner Amanda Abbington. So generally speaking we just don’t like to go outside our tiny circle very much.

And continuing to the theme of nepotism in Sherlock, here’s lovely Amanda Abbington talking about the “infuriating thing” about Martin Freeman. Because nobody likes a know-it-all!

Working with Martin is a joy, it really is. The infuriating thing about Martin is he will get his sides, his script, and he’ll say ‘right, go over it with me’. He’ll read it once, he’ll read it twice and then he’ll say ‘test me’ and he’ll know his lines verbatim. It’s so infuriating as it takes me quite a while to learn lines, but he just knows them straight away.

Ending the Sherlock theme for the day, Sherlock (the character) posted a note and a video on The Personal Blog of Dr. John H. Watson about John and Mary’s wedding. And the comments are amazing (but it’s also kinda sad… but those are just my fangirl feels)

Habemus new Pixar short! It’s a Monsters University spinoff titled ‘Party Central’, and it will be shown in front of Muppets Most Wanted when that movie hits theaters on March 21. The plot?

Mike and Sulley and their Oozma Kappa frat brothers try to throw a monster blowout party but are dismayed to find that no one is showing up. Fortunately, they have some extra inter-dimensional doors handy, which they put to creative use to get the party rocking.

Here we have three new The Amazing Spider-Man 2 posters! There’s a lot of Electro on Time Square!

Oh yeah, since Agents of S..H.I.E.L.D. returns today from its mid-season hiatus, the bosses Jed Whedon and Maurissa Tancharoen talked about all the things fans have been complaining about the series~ I guess it’s a good start for those who clearly weren’t getting what they were expecting for the show! It’s not slow, you guys, they are working on it!

Our intent is to create interest in the characters, along with a desire to know more about them, then peel back the layers slowly but surely. It’s amazing how much people hate the word slowly these days. All of our characters are spies—with the exception of Skye, who is fast becoming one—and are trained to play things close to the vest. But yes, as the season and show progresses, we’ll be uncovering more and more about our characters… as well as meeting some new ones.

Also, as we all expected… Geek Grandpa Stan Lee will appear on Agents of S..H.I.E.L.D. because why not? Lee, who’s also an executive producer of the show, says his role will be “big”, but we know that doesn’t say anything~ The episode itself will most likely air February 4.

And now that Paul Rudd is to be on Ant-Man, Clark Gregg also kinda wants him to appear in Agents of S..H.I.E.L.D., which I wouldn’t mind actually… of course it depends which “Ant-Man” is Paul Rudd.

I hope [Rudd] does a lot of films with them and he comes onto our show, I love that idea. I love that idea. I think he’s amazing and, for me, what’s great about Marvel is the kind of outside the box casting that they’ve done, starting with Robert [Downey Jr.] who now seems so perfect, but I think was a little bit of a tough sell at the first moment.

On the DC (and rumored) side of things, Gal Gadot will get to wear a Wonder Woman suit  on the Superman/Batman movie, and it will be more of an armor than the flimsy Lynda Carter swimsuit-like design~ I approve, warrior princesses shouldn’t wear spandex!

Two comicbook news from both man publishers. First, we have the preview of Ms. Marvel #1, which also takes me to a lovely and long interview with writer G. Willow Wilson who talks about the “burden of representation that comes into play when there aren’t enough representatives of a certain group in popular culture”. The other is that Injustice: Gods Among Us year two launched in digital and print, and writer Tom Taylor wants “to see powerful beings, who were once allies, fighting each other with the future of the universe at stake”. Yes, drama! 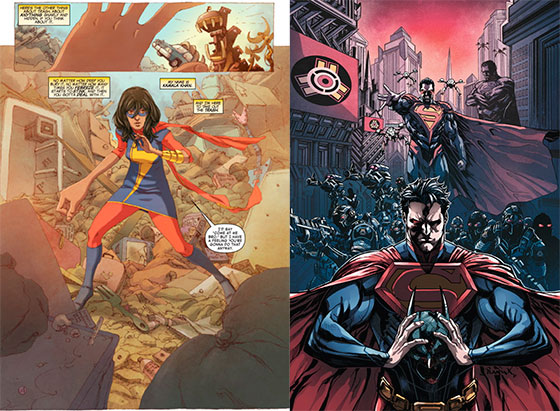