The Fangirly Diary of a Geek Girl: One Last Time!

Greetings, fellow fangirls and fanboys! This week was a Hobbit filled week, starting from me actually watching the last movie~ But besides that we stuff on Agent Carter which will soon premiere, and of course the Sony Hack which is the gift that keeps giving! First things first though, here’s how the week started:

There was a cool convention in Brazil called CCXP – Comic Con Experience that I forever regret not going. In there President of Pixar Jim Morris talked about upcoming movie Finding Dory, which premieres June 17, 2016~

The story of the movie will follow Dory, Merlin and Nemo as they set off on a journey to find about Dory’s past and parents. The movie will be mainly set in the Marine Biology Institute of California, a huge complex of rehabilitation for marine life. Dory learns that she was born and raised there and was released in the ocean when she was a kid. We will se new characters, like an octopus, sea lions, a beluga whale and others.

Producer Dean Devlin talked about Independence Day 2, including Will Smith not being there Roland Emmerich directing it, and Stargate reboot being pushed back because of it. Also, for now it’s just one sequel, instead of two. They wanna wait for it to be succesful first, which is a good call actually.

We decided just to do one first to make sure that people like where we’re going. If that works well, there’s an ability to do some world building which would be really fun and interesting to do. I think Roland and everybody felt, let’s just make sure 20 years later that people still are interested. I think in our case, we started to feel that maybe we were being a little bit arrogant by assuming that we could do two movies. We said you know what, let’s scale it down. Let’s first make sure that it works for everyone.

You know how Stan Lee usually makes a cameo in Marvel movies (whether they are Disney, Fox or Sony)? Well, he’s also making a cameo in Agent Carter! Specifically in the fourth episode~

On January, Marvel characters give a warm “Welcome Home” for Star Wars (or so comicbookmovie claims)! And there are a bunch of interlocking variant covers that show the heroes lining up for something. What’s that? We are yet to know! And Marvel ain’t telling yet. But the first set shows us these picture (which include Avengers: Age Of Ultron posters behind Cyclops and Sabertooth) It will be 20 variant covers in total! Here’s the first one of the set from Angela: Asgard’s Assassin #2: 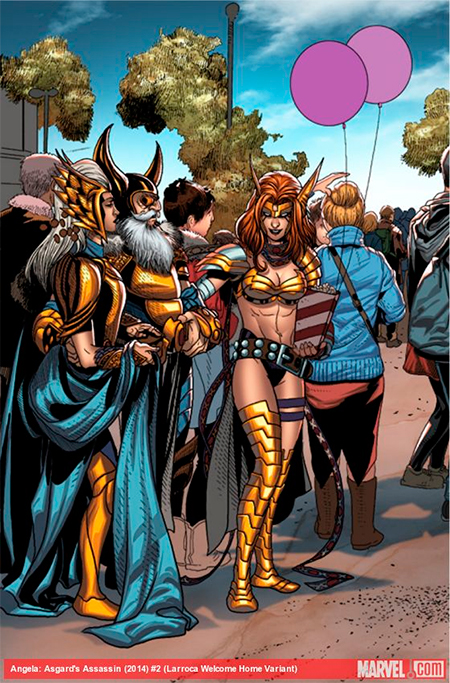 Benedict Cumberbatch and Andrew Scott won at the British Independent Film Awards. Benedict Cumberbatch got the Variety Award for his part in helping to “focus the international spotlight on the UK” and gave a long heartfelt speech. You know, for being Tumblr’s boyfriend and making many people love him and despair. Andrew Scott got best supporting actor, winning over Michael Fassbender, Rafe Spall and Sean Harris, thanks to his performance in British Thatcher-era drama Pride. Both also got the great present of booze and met afterwards for some PDA~

Joaquin Phoenix talked a bit about his almost playing the titular character in Doctor Strange. He ain’t sure how close he was to getting the part, but dude sure still loves Marvel movies as we geeks do, even if he implies “the fit wasn’t right”~

I like all sorts of movies. I know that I typically do dramas that I guess are maybe considered independent but I like all sorts of different movies. I’m just looking for good characters and big ideas and a great filmmaker. Sometimes the fit is right and that’s it. Those guys make great movies. I loved Iron Man, I liked Guardians of the Galaxy. I really like the movies they make. I enjoy watching them. I think they do them really well. The superhero movies are our version of those great Kung Fu movies. I enjoy that.

Here’s a new promo for Agent Carter where Peggy is a one woman army and you will deal!

John Ostrander, creator of the Suicide Squad, talked about the movie. Dude seems pleased, and is very aware of the difference between movies and comic books. He is also glad that Warner’s list of possible actresses for Amanda Waller is the same as his, and he also gives a new suggestion:

What’s really interesting to me is that all three of the women that they were talking about, Oprah Winfrey, Viola Davis and Octavia Spencer, were at the top of my list. […] Oprah was actually at the top of my list! She showed in The Color Purple that she’s a really good actor, and she’s got the attitude for Waller. And they’re all of the same general build, which I made for Waller. I like that, as well. I think Queen Latifah would be a good fit, too. She almost did Waller when she did Chicago. She certainly has the attitude.

Jason Momoa was also at CCXP – Comic Con Experience, at talked about his take on Aquaman (“a bad-ass, otherwise, they wouldn’t cast me for the role”), as well as the multi-pic deal he has with Warner (4 movies!), the director he would wish for the movie (Zack Snyder, ugh fine! Aquaman is slow motion could look great), and if he were not Aquaman who he would be (Lobo!)~

In box office news, The Hunger Games: Mockingjay Part 1 maintains its first place for the third week in a row in US! It is a sure thing it will win over Captain America: The Winter Soldier for second place at 2014 US box office. We will see if it reached Guardians of the Galaxy, but it is likely it will!