The Fangirly Diary of a Geek Girl: Oh what a night!

Greetings, my fellow geeks! This week has been good for Steven Moffat, Doctor Who series 8 premiere had good ratings and Sherlock did pretty well at the Emmys! Besides that we have the regular geeky news of comicbook movies and TV shows. Here’s how the week started:

After a satisfying yet not particularly great first episode of Doctor Who series 8, here we have the trailer of the next episode “Into The Dalek”~

Yes! Guardians of the Galaxy has regained their rightful place at US box office! Also, Sin City: A Dame To Kill For totally bombed. Auch. That’s what you get for waiting almost a decade to get a sequel. Strike while the iron is hot, they say! Anyway, this new rise to the top for Guardians of the Galaxy means they have become the highest grossing summer movie of 2014 in the US! Yes, they beat Transformers: Age of Extinction!

In more space news, here are three new TV spots for Star Wars Rebels. And OK, it seems I could like this one. I will give it a shot with the movie Star Wars Rebels: Spark of Rebellion in October. That will give me an idea if I want to follow the series or not~

I always knew first editions of iconic comicbooks and comicbooks characters were worth some pretty coin, but today a record was broken. Some dude (or dudette, the article doesn’t say) paid $3,207,852 on eBay for Action Comics No. 1. You know, the 1938 comic that featured Superman’s debut and the reason we have superhero comicbooks today~ This is a picture of Darren Adams and the comicbook he just sold. Not pictures, his freaking 3 million dollars~ 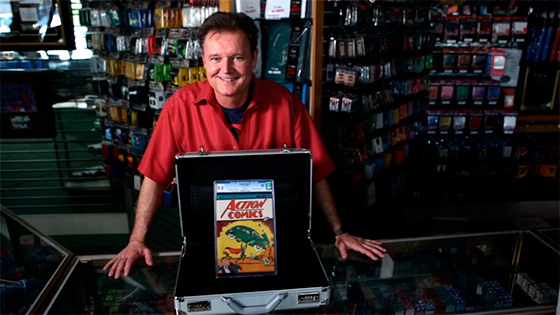 Back to Doctor Who news, Peter Capaldi’s debut was the biggest viewed Doctor Who series opener in four years! Good work although it couldn’t beat Matt Smith’s debut or the first episode of New Who, “Rose”.

OMG! Daniel Radcliffe admitted that he has talked with Marvel! He could become part of the MCU! OMG! Cue (more) fanfics of Harry Potter as part of The Avengers! Actually, it was an off-hand comment while he was talking about his time at SDCC this year. But a girl can dream~

I went as Spider-Man this year. Which is half childish wish fulfilment to actually be Spider-Man and half that’s the only way that I could have walked around the floor at Comic-Con. I actually talked to some of the guys from Marvel not long ago, and they were saying, ‘We’re just going to wait for somebody at Comic-Con to build an actual Iron Man suit, and then we’re just going to buy it and use it for the film.’ Like they can’t wait for that to happen.

Neil Marshall, director of some great episodes of Game of Thrones and the pilot of Constantine, is interested in “a big movie with a strong female lead”. And he’s more partial with people with no superpowers. So yes, he would love to do a Black Widow movie. Marvel, let him do it!

I would love to do a Black Widow movie. That’s perfect, I would love to do that. That character is really interesting, she doesn’t have any superpowers, she just has extraordinary skills, and the world that she comes from, being this ex-K.G.B. assassin, I find that really fascinating, yeah.