The Fangirly Diary of a Geek Girl: O Captain! My Captain!

Greetings, fellow fangirls and fanboys! Lots of comicbook and TV series news this week, but also interesting news about MCU including a certain new trailer. Interesting news like everyone and their dog being in poor Captain America’s movie. Here’s how the week started:

My favourite new comicbook artist/writter Noelle Stevenson together with Sanford Greene are bringing back Runaways, this time set on Battleworld, the new place created for the “Secret Wars” Marvel event. This time instead of being the kids of villains, the new team comes from a school where the headmaster is a super villain and the school is kind of a corrupt organization that wants to create more villains. Hijinks ensue! So, what about the new team? Well, it seems to include Bucky, Amadeus Cho, Jubilee, Cloak, Dagger, Skaar and new character Sanna. And this is how Noelle describes them:

I’ve been referring to them informally as The Breakfast Club, because they’re a group who wouldn’t necessarily choose to hang out with each other under normal circumstances — and actually outright hate each other in a few cases — but end up having to work together to survive and find out that they have more in common than they thought. 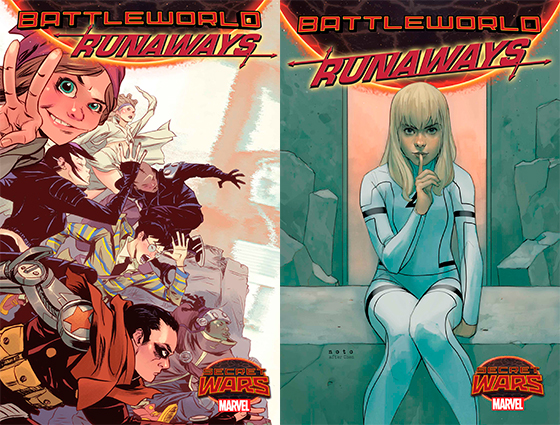 We are getting an Adventure Time movie. Yep on the Big Screen! Ain’t nobody got time for TV movies or straight-to-DVD ones! We don’t know when we are getting it, but Warner Bros. is working on it right now.

Sam Heughan talks about his character Jamie Fraser in Outlander, and how he’ll be in the rest of the first season~

As we begin to discover in the second part of the season, he’s got a lot more chinks in his armor. He’s not actually as perfect as we think he is. He has pride, and is stubborn, and has a lot of relationships he’s not dealt with yet. His sister, and his father, and I think also … we just begin to learn a lot more about who he is.

Despite a serious-business kind of trailer, we are getting more and more hints that Ant-Man is going to be a funny movie. At least as funny as Guardians of the Galaxy, or so Bobby Cannavale (who plays the mysterious role of Paxton) said:

It’s pretty funny. I think so. I haven’t seen anything but it felt funny. It’s Paul, so I think they’re not hiring Paul Rudd to be The Winter Soldier. It’s going to have a sense of levity to it, like Guardians of the Galaxy.

New Harry Potter related book! J.K. Rowling: A Bibliography 1997-2013 details in 544 pages some of the behind-the-scenes action that occurred during the creation of the awesome book series. I will definitely check it out when it comes out.

Spider-Man rumor! The new movie will be called Spectacular Spider-Man, will be a three part series, and Drew Goddard (The Cabin in the Woods) will be writing/directing. Some of the plot could go like this:

Others claim that while Marvel are considering Drew Goddard for the movie, they have yet to meet him and it’s far from a done deal.

Neill Blomkamp backtracks and says he ain’t trying to undo Alien 3 or Alien Resurrection with his new Alien movie. He just like the first two Alien movies the best and wants a to make a movie connected with them. Also, Michael Biehn’s Hicks might also join Sigourney Weaver in the film.

Maggie Smith implied that she would leave Downton Abbey if it were to have a Series 7 since her character would be ancient with the way time has passed in the series. Her publicist then said old homegirl will totally stay as long as the show lasts. Which just can be Series 6, since the show’s creator, Julian Fellowes isn’t even sure it will have a Series 7. I certainly hope so, I don’t watch Downton Abbey a lot, but I do enjoy the Dowager Countess!