In case you have forgotten, Sony Pictures is making a Goosebumps movie with Jack Black as R.L. Stine… who apparently keeps the monsters he created locked up in his original manuscripts to protect the world. Here are the first promo pictures of said monsters!

So, Constantine. After the news of the show not getting a nine back order and no news on the second season, people were obviously worried. And not only fans! Series lead, Matt Ryan, started a #SaveConstantine campaign on twitter and the hashtag was trending for a while. To add that, a Save Constantine petition was launched. In all this fan (and lead actor) drama, producer Daniel Cerone told us all on twitter that “Constantine will survive” and noted that the show is getting better ratings so just keep watching and tweet NBC or write on their Facebook just so they see the fans exist and they are damn loud~

Constantine news aside, hey Guillermo Del Toro finished the script of Justice League Dark! It went to weekend reads at Warner Bros and depending on the studio’s reaction, we could get an official announcement about the production moving forward  in a few days. Besides that, Guillermo del Toro talked a bit about Pacific Rim 2, which is some years after the happenings of the first movie, and that Charlie Day and Burn Gorman will totally be there~

It’s quite a different movie from the first one in that, but I think that two of our main characters like in the first one are Burn and Charlie. They are really, really – I mean, honestly, they are probably the guys I have the most fun writing along with Hannibal Chau (Ron Perlman) so just from a purely selfish drive, I like writing them. I love writing for Charlie and Burn. I mean, [Burn’s] in Crimson Peak for that reason, because I love working with him.

Peter Jackson gets his star on Hollywood Walk of Fame! He will be honoured on December 8 and his star set to be placed outside the Dolby Theatre, the venue for the Academy Awards.

BBC has shared the first images of Moffat shows Christmas Specials! Even if, you know, Sherlock‘s won’t actually premiere at Christmas. Doctor Who‘s totally will though! And with a title of ‘Last Christmas’ we do wonder what would be the fate of Jenna Coleman’s character. Also, are Sherlock and John cosplaying or is this some kind of time-travelling/parallel universe story? 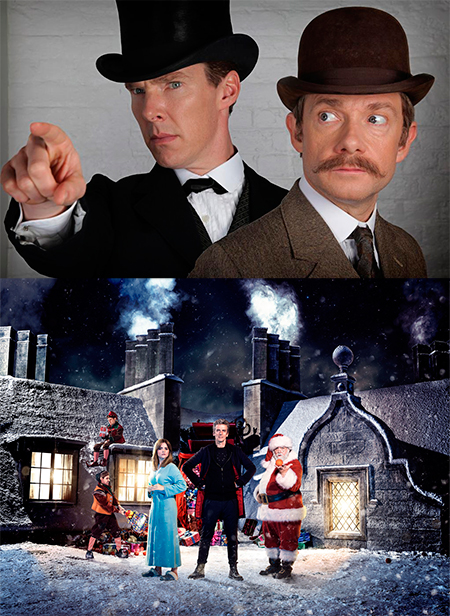 Rumor time! Usually, the Star Wars animated series work as prequel to different movies, with the latest one Star Wars Rebels happening before A New Hope. Well, not anymore. Apparently the next one will be set in the current movie timeline!

James Cameron said that the Avatar sequels will be shot at 48 frames-per-second just like The Hobbit movies! I totally don’t mind but I guess some will do. About the movies themselves, there’s not much to tell except that “They’re gonna be bitchin’”, in Cameron’s own words.

Remember how we are getting a Supergirl TV series? It could end up being in the same world of Arrow and The Flash. But how? Didn’t The CW passed on and now the project is in CBS’s hands? Well, someone working there spilled some beans, probably, about the plans for the series:

Later in the afternoon at his other office on the Warner Bros. lot, Berlanti meets with fellow producer Ali Adler and Oscar-winning costume designer Colleen Atwood to go over looks for their upcoming revamp of Supergirl. The show will follow 24-year-old Kara Zor-El, Superman’s cousin, and with a twist that that could melt fanboy brains, Berlanti says it’s possible this Supergirl could enter the worlds of Arrow and The Flash.

Will The CW and CBS collaborate? Will they keep joining a sort of awesome DC TV Universe? Can at least Constantine and Gotham be mentioned so I can imagine all happening in the same world?

Morena Baccarin is getting all the DC TV movie! Girl not only voiced Black Canary, Talia al Ghul, and Cheetah in various DC animations, she will be Dr. Leslie Thompkins in Gotham and now will also be part of The Flash! Get that DC money, Morena!