We are getting a Jekyll & Hyde ten part TV series! Because there’s a lack of imagination and everything must be a derivate work! Not that I mind since they can make awesome things with it~ This new story is about Robert Jekyll, the grandson of the original Dr. Jekyll, in the 1930s. And yep, his experiments were hereditary, and so Robert gets a dual personality and uses it to become a Hulk-style superhero. This is what novelist and showrunner Charlie Higson has to say:

It’s an exciting challenge to take Stevenson’s work and use it as the basis for a new Jekyll & Hyde. So many superheroes with secret dual personalities have been brought to life thanks to Jekyll & Hyde. He’s one of literatures most important and influential characters and it’s a privilege to be rediscovering him.

On not so great news on TV, Constantine will stop production after 13 episodes. We won’t get a full season, it seems. Or even a second season? Well that remains contention at NBC. Dammit, fine, the show ain’t that great. But it is good and has a lot of potential! And the ratings are getting better and better! Just… wait a bit NBC!

James Gunn loves Nebula and he hopes we will see her again. Hopes? Come on! You can write her into the script of Guardians of the Galaxy 2 if you really want it too! Don’t be lazy and own up to your words, mister!

[Winter Soldier] was only a taste of what’s to come with the next film, and I couldn’t be more humbled and excited. They just kind of called and said, ‘What kind of shape are you in? We’re going to need a body scan.’ They scan your body so that whatever you wear fits you like a glove….We all know what Crossbones represents in his world, so when they called me and said we gotta do the body scan, I was like ‘Okay!’

Andy Serkis talked with Empire Magazine about his recent work in Avengers: Age of Ultron. Specially the work done with James Spader and Mark Ruffalo on Ultron and Hulk respectively. He also comments how he loves working with the actors and directing them on the journey of motion-capture:

It’s a journey I end up going on with the actors. To find out what they want to get out of it, and and what we can do to help them so it’s still them authoring the role. Initially when you’re asking them to put a grey suit on, they’re not very into the idea. But it’s usually within the first hour, when they can see the result of them being in that suit [on screen] in real-time, they settle in. And then they’ve lost themselves in our world. James in particular – he loved every minute of it.

Talking about Empire Magazine, we saw the subscriber’s cover of a concept art of Thorin in his kingly duds. Now we have five more collector’s covers that depict, well, the five armies of The Hobbit: The Battle of the Five Armies. Here are all the pretty covers together. 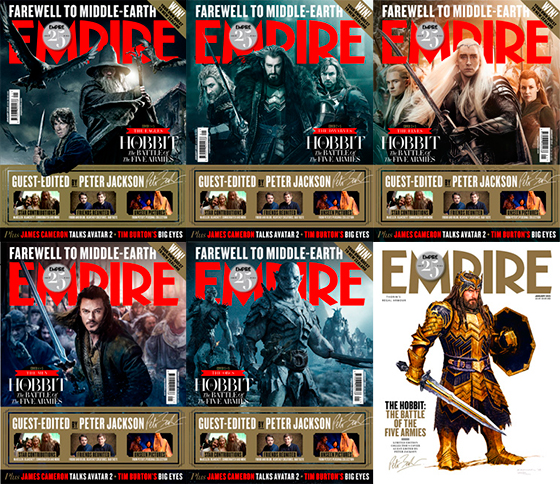 It’s rumor time! It seems we might have the plot of the 2016 Star Wars spin-off movie! You know, Gareth Edwards and Gary Whitta one. Here’s what Slashfilm found:

We’ve heard the 2016 Star Wars spin-off movie is about the group of people out to pull off the ultimate heist in a galaxy far, far away. What the group is trying to steal is one of the most important linchpins in Star Wars history — they are out to steal the plans for the first Death Star. That’s right, the story is set during the A New Hope era. However, it’s not the Rebel Alliance as we’d all assumed. As rumor has it, the story follows a group of bounty hunters who were hired for the job — think the Seven Samurai or Suicide Squad meets Ocean’s Eleven in the world of Star Wars.

Oscar Isaac is taking over franchises! Not only does he get a leading role in Star Wars Episode VII: The Force Awakens, but now he snatched the titular role in X-Men: Apocalypse from Tom Hardy and Idris Elba (who were rumored to take the part). Get that franchise money, Oscar!

On more casting news, seems that Christoph Waltz could be playing Blofeld in Bond 24. Guy is an iconic Bond villain of old so yay for bringing him back if it’s true.

The first official stills and posters of Pan have been revealed. And Hugh Jackman looks weird as Blackbeard but I can’t hate. Rooney Mara as Tiger Lilly tho? I am still not sure about that one! 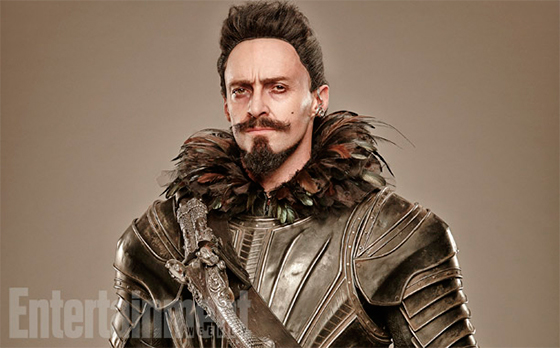