Greetings, fellow fangirls and fanboys! This week we have more stuff from Rogue One, including merchadising front and center of its heroine! Also, lots of TV news, like new images, new characters and new series. Here’s how the week started:

Here’s a new Luke Cage clip, where the titular character ain’t happy about always having to buy new clothes. Also, this goons sure need to learn fast that dude is bulletproof!

Did you know that FX’s Legion, will be part of the X-Men movie canon… kinda? According to Brian Singer, who is executive producing the series, Legion would be “part of the X-Men universe, but when you watched it, you wouldn’t have to label it, it could exist completely on its own.” And it “will relate to future X-Men movies.” Which kinda contradicts what FX Networks CEO John Landgraf said back in January, that Legion “takes place in a parallel universe. […] I don’t foresee any characters moving back and forth (between the movies and the series).” But, there are months between those two statements so I guess things could have changed.

Here’s a new batch of stills from Rogue One: A Star Wars Story, courtesy of Empire. Here’s one of Director Krennic because I can’t help but share pictures of that fabulous bastard. I know Edna Mode said “no capes”, but they are just so majestic, dammit! 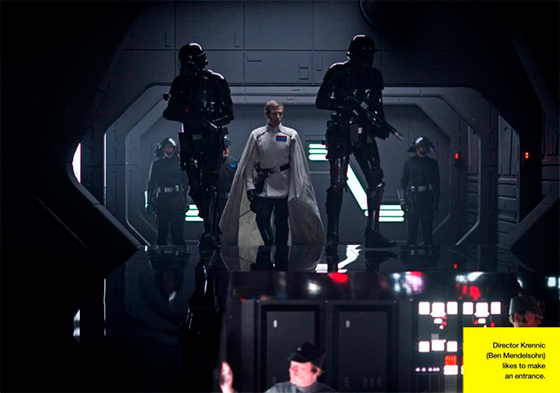 As we have noticed, Thor (or Bruce Banner/Hulk) weren’t in Captain America: Civil War, so what it is that he has been doing meanwhile? Wonder no more!  Marvel Studios has released a little glimpse into his activities. With new roommate (and Bruce Banner/Hulk cameo) included! The clip was first released at San Diego Comic-Con a couple months ago, but now it was released online to promote the release of Captain America: Civil War on Digital HD/DVD/Blu-Ray.

Ben Affleck shared a video of what appeared to be Deathstroke on his twitter… and then it was confirmed that Deathstroke will, in fact, be the main antagonist of the Batman standalone movie he’s directing. At least, according to TheWrap.

Let the Right One In will come back to life in TV adaptation… for some reason. TNT is ordering a pilot, which will be will be set in Vermont. Perfect from blood on snow!