Most excellent news!’ Bryan Fuller will be the showrunner and co-creator of the new Star Trek series set to premiere in January 2017 in CBS! This is awesome considering Fuller is a Star Trek geek who started his career on Star Trek: Deep Space Nine and Star Trek: Voyager. But what about the Starz’ adaptation of Neil Gaiman’s American Gods? Well, Fuller will keep co-showrunning that one with Michael Green (Heroes). Dude sure is busy, what with also prepping the revival of Amazing Stories for NBC.

Now back to Superbowl talk! The last one I promise. According to one of my favourite things in the world, that is an infograph, Captain America: Civil War won the most buzz in Superbowl movie ads with 129,413 mentions online. And it’s all to Tony Stark’s glorious face when Bucky shot him in the face. Check out part of that infrograph, but you can see it in its entirety here. 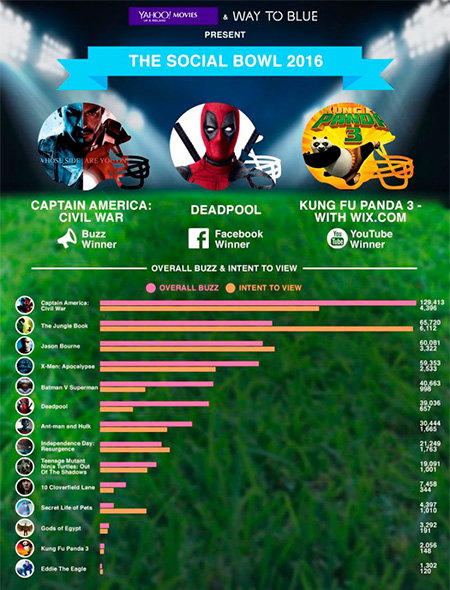 Deadpool also generated good buzz at the Superbowl, but it the favorable tracking that has made Fox start working on the sequel already. While nobody has been signed yet, Fox is intent on keeping the creative team together.

In comicbook news, Archie Comics remains quite socially progressive! Since Jughead No. 4, Jughead Jones, sarcastic BFF of Archie Andrews, who loves food and not romance, is canonically asexual. Sure, it is mentioned briefly, but considering writer Chip Zdarsky’s on the issue, I’m sure he’ll do an adequate job of talking about it if the opportunity presents itself:

People have asked me if there is going to be a romance if I’m writing Jughead, because I’m very romantic, and the answer is no, because there is enough of that in Archie. I think something like asexuality is underrepresented, and since we have a character who was asexual before people had the word for it, I’m continuing to write him that way.

Disney Prince Tom Hiddleston loves to write, and I love to read him. If you read my column you know that. So, here’s Hiddles’ latest article, this time about his new BBC series The Night Manager, and specially about co-star Olivia Colman as Angela Burr.

OMG! I knew it! The script of Harry Potter and the Cursed Child Parts I & II will get print and digital publishing after the play’s world premiere! The official first performance is on July 30th, which will mean the published script will be available on July 31st… and that’s Harry Potter’s birthday! Perfection! BTW, this would be the “Special Rehearsal Edition”, corresponding to the preview shows. Some date later we will get a “Definitive Collector’s Edition”. 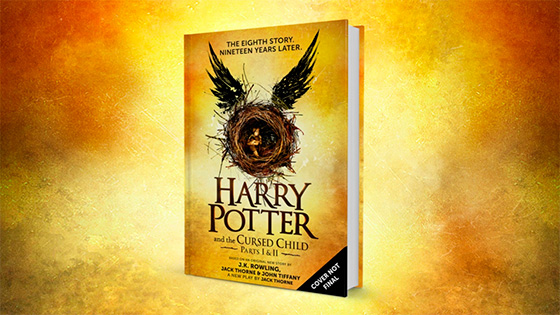 In other news, Michael Fassbender compared Assassin’s Creed to The Matrix… and I kinda get his point, even if I never thought to make the connection.

I’ve always thought about The Matrix when we’ve approached this. This idea of DNA memory elevates it from a basic fantasy genre, because you have something an audience can actually believe in. Then the journey becomes so much more elevated, because you’re on board in a different way.

There are new posters for Finding Dory, which come with the question/hashtag #HaveYouSeenHer. Here’s the first one: 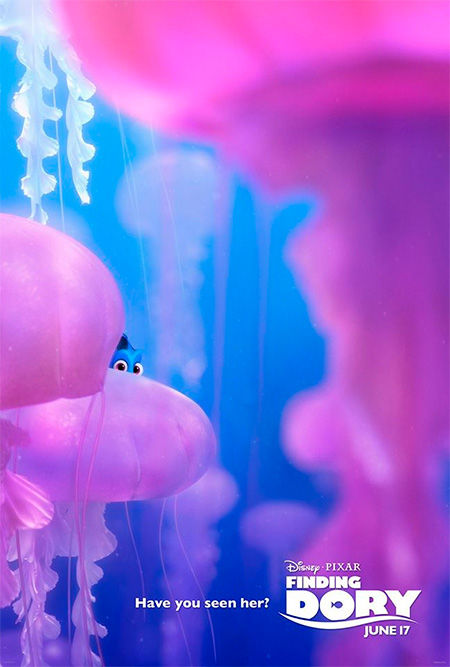 Remember Dark Tower? The Stephen King eight-volume story adaptation that has been in production hell for a while? Well, Stephen King thinks that the movie will finally happen, and it will be with Idris Elba in the lead role of cowboy Roland Deschain and Matthew McConaughey as the sinister Man in Black. I certainly hope so!

Hayley Atwell might get a new gig at ABC. She’s been cast for a pilot called Conviction. That could suck for the future of Agent Carter. Not that we were expecting a new season, since getting a second one was a pleasant surprise. Oh well, get money, gurl! So, what’s Conviction about?

Conviction would star Atwell as Carter Morrison, the “brilliant but ne’er-do-well daughter of a former president, who is blackmailed into taking a job as the head of Los Angeles’ newly created Conviction Integrity Unit. She, along with her team of lawyers, investigators and forensic experts, work together to examine cases where there’s credible suspicion that the wrong person may have been convicted of a crime.