Greetings, fellow fangirls and fanboys! This week we finally got to watch The Doctor’s new duds! Also, a franchise fall flats and another will go on and on. And, of course, Marvel and DC news! Here’s how the week started:

Current Marvel darling (and King of our Hearts) Taika Waititi confirmed the rumors that the What We Do in the Shadows sequel is happening, and will reunite with Jermaine Clement to co-write and co-direct it. Fucking finally. But “you aren’t going to see it for seven years”, because they are “notoriously terrible at writing together”. Dammit. And yes, the title of said sequel will be a pun.

Empire gaves us a new picture of Pacific Rim: Uprising, and it included a tiny interview with John Boyega where he talked about his role in the film… which explains some of the scenes from the trailer:

At the start of the film, he is an absolute crook. There are rogue Jaegers where people have collected spare parts and made their own machines. Jake is stealing from people and selling Jaeger parts. 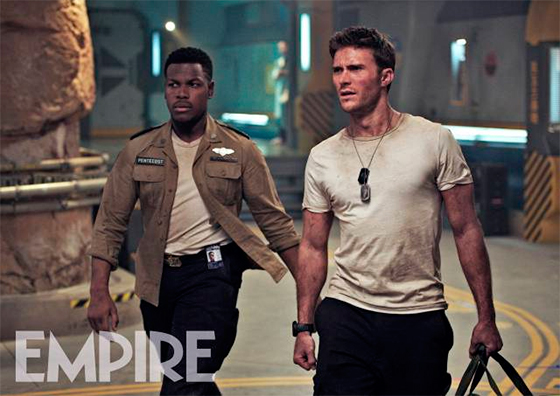 The MCU has become the first ever film franchise to reach $5 billion domestically with the great success of Thor: Ragnarok. That means this franchise has make more bank in the US than the Star Wars franchise ($3.3 billion), the Harry Potter world ($2.6 billion) and the Batman franchise, including all versions of the character on the silver screen ($2.4 billion).

Chris Hemsworth said Thor will remain unable to watch 3D movies in Avengers: Infinity War, despite what one might have seen in the D23 teaser. About said event, this is what Taika Waititi has to say:

That kind of just evolved just throughout the script process, to just keep stripping that character down, having him lose the hammer and all those things and to kind of create a broken version of the character. At the end, he sort of becomes a refugee.

OMG! Disney is reportedly in talks to purchase 21st Century Fox! Well, not all of it, since Disney doesn’t care for the news and sports assets (and also because of US laws). But frankly we don’t care about those assets either. What we geeks care about is Marvel could get to use the X-Men and Fantastic Four! Right now the X-Men franchise is expanding, and if this purchase actually happens, I just hope they let them do their thing. Because considering the current status quo of both the MCU and the X-Men franchise, they would have to reboot both for it to make sense. Nobody is checking for Fantastic Four tho, and they could easily make them join the MCU.

Thor: Ragnarok co-writer Eric Pearson talked about the film’s surprising ending… and it really shouldn’t be considering what the title implies and what happened in the comics. And still I was surprised they went there in the MCU, specially the reasons for it:

It’s Ragnarok. That means apocalypse in Norse mythology. Don’t we got to blow it up? We really got to do it here, and I think we can’t be scared of it. The idea of making Thor a quasi-Noah figure… in getting everyone onto the arc to preserve them — I think I knew right from the beginning we had to do that. It was more about the tricky thing of making it Thor’s choice. It wasn’t that he just lost a huge battle. He learned something more about being a ruler that the people are the kingdom, not the space itself.

Check out Wonder Woman kicking ass and talking names in the name of the defenseless in a Justice League clip which we have seen parts of in the trailer: