Here are some character posters from the live-action movie of Attack on Titan. While they look like good, they don’t look much like the characters in the manga/anime, considering Mikasa is the only Asian in the original story. Guest they will drop that storyline for the movie. Also, there are some character posters for new original characters, which I am not sure I want. Anyway, the story will certainly deviate from the one we are familiar with. Here are my two favourite posters, even if I am fairly sure Hanji never used an RPG. Sasha looks adorable with her bow and arrow tho~ 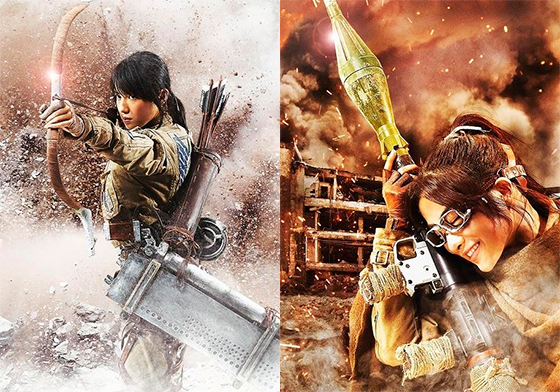 We are totally getting the Graysons (a.k.a. Robin’s parents) in Gotham! Young Poison Ivy (who had the most obvious name ever) is getting back in the show. But we aren’t getting Harley Quinn yet. Which I am fine with, since I am fairly sure she should be younger than Bruce Wayne~

We’re going to do a prenatal origin story for Robin down the line.There are no MRIs involved. There’s an episode coming up where we learn how Robin’s parents got together.

You know that blue alien kept on ice in Agents of S.H.I.E.L.D.? It’s been finally revealed (confirmed) which race it is! And as we all nerds called it, it is totally a Kree! Just like Ronan from Guardians of the Galaxy. That and more will be revealed on the December 2nd episode. Here’s what executive producer Jeffrey Bell had to say:

Our people don’t know anything about the Kree or that there’s a planet full of them. What they do know is that the strange carvings created by Coulson after he was injected with the Kree serum are actually the map of a city, and they need to find that city before Hydra does. But where is it? Here or on another planet?

Talking about Guardians of the Galaxy, sorta… Chris Pratt will get a new lead role! He will be the star in the film adaptation of Image Comics’ Cowboy Ninja Viking. The story is about Duncan (that’s Pratt’s character) who is “a schizophrenic assassin working for a secret government program who possess the skills of a cowboy, a ninja, and a Viking.” Yep, as nerdy as it sounds! Also, according to Collider, “the three different personalities (the Cowboy, the Ninja, and the Viking) physically manifest onscreen as three different people when Duncan switches personalities, but to onlookers he still just looks like Duncan”.

We are getting a Game of Thrones video game and the first episode will be titled “Iron From Ice”, which will premiere soon on multiple platforms. We know that cast members Peter Dinklage (Tyron Lannister), Natalie Dormer (Margaery Tyrell), Lena Heady (Cersei Lannister) and Iwan Rheon (Ramsay Snow) will voice their own parts for the Telltale game. I have faith in this company because they worked  on The Walking Dead and The Wolf Among Us video games, which means this has potential to be awesome too. Like those game, the Game of Thrones one will be an episodic series spanning six chapters released over the course of several weeks. The story follows the House of Forrester, which must protect themselves from destruction during The War of the Five Kings.

On more Gotham news, showrunner Bruno Heller said killing off established Batman characters ain’t out of the question if it can be justified. I guess Gotham doesn’t fear immersing in a total AU world!

I wouldn’t say it’s iron clad. You’d need a damn good reason to do it and a damn good end game to justify it. We’re certainly just learning the ropes at this stage. Not to be modest about it, but we’re still learning how to do a show this big. I’m always deeply reluctant to kill off characters simply for the shock value of killing them off. I’m not averse to cheap tricks.

Chadwick Boseman talked about his nerd credentials for Black Panther. He has read comic books, but wasn’t a Black Panther fan even if he knew of his existence.

I wasn’t, like, a fanatic. I definitely read comic books, but this particular character was not someone that I knew very well until the last 10 years or so. I’d heard of him, but I hadn’t really been like I’m a huge Black Panther fan. I think once you get into the film business, though, you start thinking about things that would be really cool to do, and then I fell in love with [the character].

OMG! Martin Freeman will host Saturday Night Live! It will be his first time! Amy Adamn will also host (will be her second time)! Oh yeah, James Franco will too, but he has done this twice before so meh.