To celebrate passing 10 million followers on Facebook and Twitter combined, Marvel have released an official version of Phase Three movies seen at the Marvel event~ 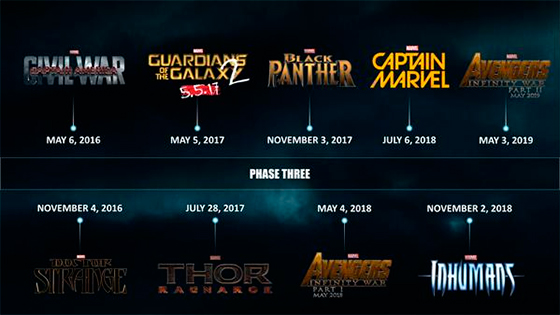 Guardians of the Galaxy released his Blu-Ray/DVD… and the important part is that the blooper reel contains something I imagined after watching the movie. Remember when Star-Lord dares Ronan to a dance-off as a distraction? But what if Ronan had taken the challenge? Watch the link. Also, Chris Pratt talked about the experience of dancing at the climax of a Marvel movie~

We were filming what was essentially, you know, the climax of the entire movie … and I was dancing. I was standing there … in front of 200 extras in full alien makeup. And none of them knew what the hell was happening either. They thought they were on a serious movie because of all the time and the effort that had been put into their makeup. So I just had this energy of, like, What am I doing?!

So, Evangeline Lilly compares her Ant-Man experience to working on indie movies. What? Marvel films are like indie projects? And Ant-Man?! Really?! Guess the experience as an actor is different for a director, unless the director’s opinion are basically the same as Kevin Feige? Oh well, here are her exact words:

I really expected to be walking into a great big machine that would be so well oiled and anybody new with new ideas or new contributions would just be a pain in the butt. Marvel could not have been more opposite to those expectations. They’ve been collaborative in a way that makes me feel like—and I know you’re going to say this is bullcrap but it’s totally true—in a way that makes me feel like I was working on a little indie project. I mean, it was that intimate and that collaborative. I just had a wonderful experience.

I am not sure how reliable this is, but here’s the supposed entire plot of The Fantastic Four remake. It read as terrible fanfiction. Really, read at your own risk. But even if it is true there are things that seem terrible on paper (computer screen) and end up being decent/good/great. So I will wait and see.

Talking about rumor and fanfiction, Kdramastars claims that not only RDJ could be in a Beetlejuice 2 if and only if Tom Hiddleston is in the movie too. Yeah, I cannot believe that. As much as I like both Beetlejuice and these actors.

On good rumors, here’s a possible description of the Star Wars: The Force Awakens teaser trailer. It is also revealed in the more detailed descriptions that Oscar Isaac is an X-Wing fighter pilot.

It’ll be short. And when I say short, I mean one minute long. It’s going to have The Force Theme played on woodwinds, softly, over flashing images of the main leads, each fading to black. There’s no dialogue, just reveals of the characters. And then the music swells up into a full orchestral piece – perhaps what John Williams recorded this weekend? – and we hear a female voice, likely Daisy Ridley’s, saying “Wake up.”And then the title card appears – Star Wars: The Force Awakens – and we see the Millennium Falcon, firing blasters, coming right at the camera.

Matt Ryan, current Constantine, speaks about the possibility of his participation in the possible Justice League Dark that Guillermo del Toro will make… someday~

What’s so great is that there’s so many great storylines and the Justice League Dark stuff as well. How fantastic would that be if we could do something like that? Obviously those things are out of my hands, so we’ll see.

Jurassic World launched the viral website Masrani Global, the parent company reopening Jurassic World, “the safest theme park in the world.” Well, it’s been open since 2005 according to the website and nobody has died… yet! There are some new stills from the movie scattered throughout the site, also a first look at owner Simon Masrani (Irrfan Khan) and Jurassic Park actor B.D. Wong as Henry Wu. There are internships, guys! How awesome must be work there, up until the dinos try to eat you of course~ 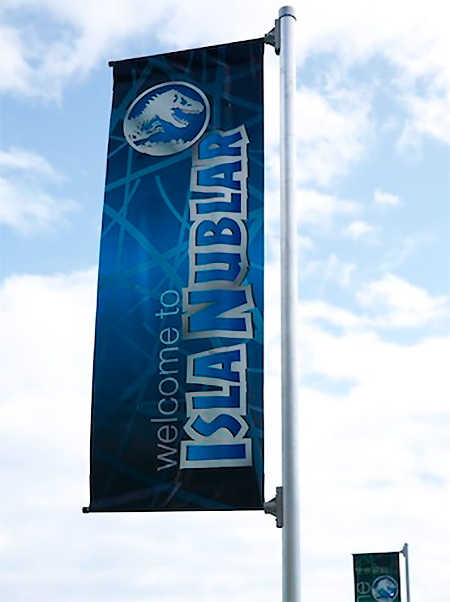