Watched first episode of Hetalia: The Beautiful World! The art has changed, but the feeling of the show is the same, so I cannot complain. Besides, the ending song is cute.

Dammit, RDJ won’t be in Paul Thomas Anderson’s Inherent Vice. I wanted RDJ in this. As much as I love franchises, I want to see him in other things as well. Oh well, at least he’ll get replaced by Joaquin Phoenix. And he made a good team with the director in The Master.

David Tennant will be Richard II in the Royal Shakespeare Company’s winter season. I guess he’s the only one who can be as awesome as Ben Whishaw was in The Hollow Crown.

And related to that news, here’s a couple of toys I wish I had the money to buy. First, the Iron man 3 Tony Stark from Hot Toys. And then there’s the 10th Doctor from Big Chief Studios. 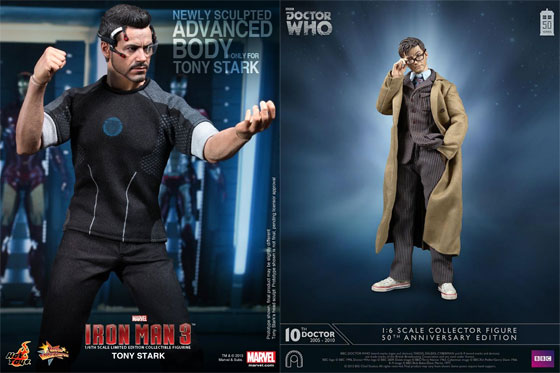 Ant-Man and Dr. Strange will get movies for “Phase 3” of Marvel Cinematic Universe, says Kevin Feige. I kinda wanted one about Black Panther or Miss (Captain!) Marvel though. I also remember the rumors of Heroes for Hire! Anyway, Dr. Strange better be hot! Like Viggo Mortensen hot. I wish those early rumors were true!

I’ve consistently been impressed with J.J. as a filmmaker and storyteller. He’s an ideal choice to direct the new Star Wars film and the legacy couldn’t be in better hands.

BTW, J.J. Abrams will still be involved in Star Trek III. Paramount Pictures vice chairman Rob Moore said so himself. Also, considering there were four years between Star Trek and Star Trek Into Darkness, he might still direct and not just produce.

The Robotech live action movie has a director. The chosen one is Nic Mathieu, whom I know nothing about, but apparently he is a commercial director who uses cool CGI effects. I guess the hype for Guillermo Del Toro’s Pacific Rim made them start to move faster, because huge fighting robots are now in. As you may know Robotech was a re-edition of three different anime series (that had mechas in common) in order to become a daily syndicated cartoon for western audiences.

Arnold Schwarzenegger is totally ready to be Conan again:

[…] For me, to get on the set and to swing the sword around again and to ride the horses and all those things doesn’t mean anything [does not scare me], because I feel like I did thirty years ago. So as long as I stay in shape, that’s the key thing, and to keep your body young.

Producer of The Legeng of Conan, Fredrik Malmberg, also says he would love to work with Peter Jackson’s WETA Workshop, but he doesn’t feel Pete will be the ideal director since Lord of The Rings and The Hobbit are “more high fantasy and Conan more down and dirty”. Clearly this dude hasn’t watched Jackson’s early movies. Paul Verhoeven would love to direct the movie, though, because he’s a huge fanboy:

I’m a big fan in fact of Conan. That’s a great movie and I found that the composer, Basil Poledouris, basically inspired many of my movies [the soundtracks] like Flesh and Blood, RoboCop, Starship Troopers and Total Recall. The score of Conan is great. The style of editing that Milius used was very beautiful, and Arnold does a great job. He was really the perfect choice.

So, Skyfall may not have gotten many nominations at The Academy Awards, but rumor has it that their 50th-anniversary tribute will have all six Bonds: Sean Connery, George Lazenby, Roger Moore, Timothy Dalton, Pierce Brosnan and Daniel Craig. Oh please, pretty please! Make it so!

Finally, something that hits the nostalgia button a tad too hard.

Internet Explorer may be crappy, but it sure has a great marketing team! Also it’s totally relatable to YAM Magazine Time Machine Blogathon: Back to the 90′s.

And that’s it for the week. Before I go, I have sad news: I’ve just realized Neil Gaiman’s dog Cabal died. He wrote this beautiful post on his blog about his life with him. Cabal was very loved by Gaiman’s fans, so much that he had his own Tumblr. May he rest in doggie heaven.