Greetings, my fellow geeks. There’s lots of geeky news this week. In fact, this week has been a roller coaster of emotions! But there was no news as important as a certain director now being in charge of two of the franchises with the biggest fandoms ever!

Let’s start with a list, why not! Here are ten facts about the new Evil Dead that make it kinda promising. The facts are fairly interesting~

There’s news regarding all three next Marvel Cinematic Universe Phase 2 movies. First, Iron Man 3, where apparently shit is gonna get real on Hollywood Blvd. with “wide-angled shots from cranes positioned high overhead ‘to capture the full scope, color and liveliness of Hollywood’ while they ‘blow up’ Grauman’s Chinese Theatre.” [1]

Then there’s Thor: The Dark World, where both new baddies decide to cough up some details. Apparently, Christopher Eccleston’s Malekith “plans to take over the universe — egged on by Tom Hiddleston’s mischievous Loki”. That’s fine, but I am still bitter they braided Malekith’s hair instead of letting that glorious hair cap free. Anyway, Adewale Akinnuoye-Agbaje talks about a certain scene that makes me very interested:

I can recall…I’m in the scene and Renee Russo is in my arms or beside me and I’m facing Anthony Hopkins and Chris Hemsworth and Chris Eccleston–and just about every great actor within that genre is in the room and you just realize it’s a great privilege and honor.

Finally, Anthony Mackie hints (by not denying) that his Falcon won’t be only in Captain America: The Winter Soldier, but also in The Avengers 2.

DanRad doesn’t get why everybody is so up in arms for his gay sex scene in Kill your Darlings at Sundance, and those should not be seen as more shocking than straight sex scenes. Also,

What weirded me out the most last night was people were asking me all these questions about the gay sex scenes. I was like, ‘You know I did Equus? Some people are asking me questions like this is a more shocking subject, which is so strange.

Homeboy’s got a point there~ 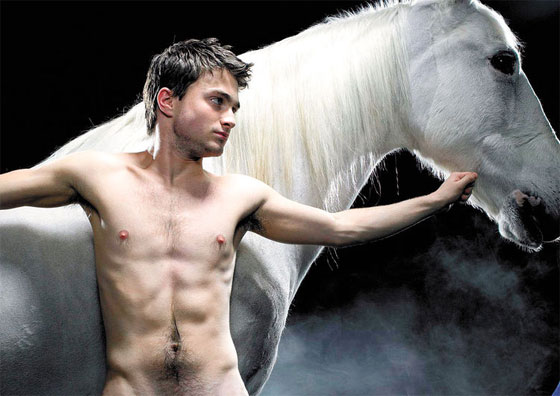 In other Sundance news, Joseph Gordon-Levitt is promoting his opera prima as director/writer in Don Jon’s Addiction, where he’s also the protagonist. He gets asked about where he wants to take his career, and after saying it’s mostly about director first and then the writing, he tells us about his fav movies of 2012:

I have eclectic taste in movies I like to watch. This year, Django Unchained was one of my favorite movies, everyone is so good and I’m so happy for Leo because he’s a friend of mine; I know he’s hilarious and he showed that side of himself. I loved Life of Pi, and Beasts of the Southern Wild. Any of those filmmakers, Ang Lee, Quentin Tarantino or Benh Zeitlin, I’d love to be in one of their movies.

Benny Batch is going to be a guest director in the Cambridge Science Festival. I’m forever bitter I cannot be there to attend.

I see what you did there, Mr. Cumberbatch!

Marvel Studios president Kevin Feige says Tony Stark is quite traumatized after the events of The Avengers, and it will show in Iron Man 3:

It’s almost like post-traumatic stress: he really has retreated after the events of The Avengers into his workshop, where he’s building advanced versions of his suits. He has [designed] a version of the suit that can latch onto him in individual pieces … anytime, anywhere. As he starts to realize, it’s basically because he doesn’t want to be out of the suit: he’s seen a lot of things in Avengers and has encountered a lot of powerful people, much more powerful than he is.