In box office news, Thor: Ragnarok already got the big money overseas in ten markets. It’s too early in the game yet, but the film is performing ahead of Doctor Strange and along the same lines as Guardians of the Galaxy Vol. 2. And it’s been officially certified “Fresh” on Rotten Tomatoes. Yep, this one will be liked just fine by both critics and fans, as Marvel film usually do.

Here are a couple of cool Justice League posters. The first one is like a better arrangement from the one last week, and it also depicts the other players. The IMAX one is even more colorful and stylized, giving them a real comicbook feel that I wouldn’t find attaching to a wall. 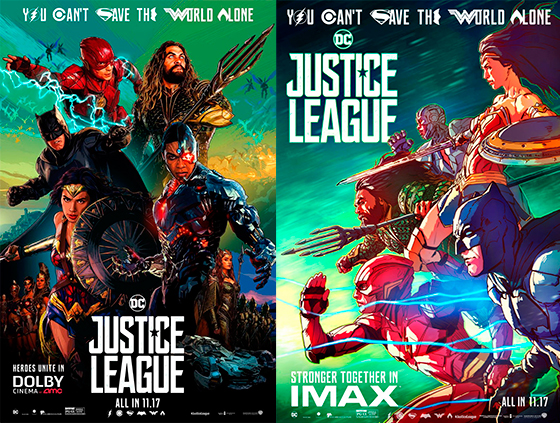 In related news, Gal Gadot confirmed that Wonder Woman’s story was indeed retconned after Batman V Superman, what with her “100 years ago, I walked away from mankind” line that didn’t add up to what we saw in Wonder Woman… which still makes me wonder what she was doing during WW2 and the Cold War.

We realized that actually, there is no way that Wonder Woman will ever give up on mankind. The reason why she left the island was because she wanted to make their life better and safer – they are her calling. So – I’m giving you a very honest answer – sometimes, in a creative process, you establish something that is not necessarily the right decision, but then you can always correct it and change it. So Wonder Woman will always be there as far as she concerns for mankind.

Here’s the first full length trailer for Marvel’s Runaways! And is that Old Lace?!

Taika Waititi explained why Hobo Odin was cut from the Thor: Ragnarok reshoots. Damn, dude has something against New York (and its alleyways)! Aww, I wanted some Hobo Odin~

We wanted the scene to have more of an emotional resonance around Odin and the sons. We wanted it to be a very special moment between them, where Odin (Anthony Hopkins) acknowledges Loki (Tom Hiddleston) as his son, and the three of them [are] together, there in that moment. It’s the first time we’ve really seen them all together in the same room alone, connecting, and you just can’t f***ing do that in New York, you know? You can’t even do that in real life in New York, have an emotional connection in an alleyway, so that was a very distracting environment in the end.

Adolescent Groot will indeed come of age in Avengers: Infinity War, and will even find a mentor, says Vin Diesel~

I can’t say too much about him, but he’s coming of age, so you’ll see the teenager find a mentor to look up to and to model himself after. The character’s great, and the films are going to be great. We’ve got such an amazing cast and a great pair of directors at the helm. The Russos allow the actors to jam on scenes together to the point where it just feels great and everybody gets their moments.

In DC film’s dubious casting news, Zachary Levi is set to star as Shazam in, well, Shazam! Yep, Levi would play the teenager turned superhuman adult that is able to take on Superman in strength and charm. Dude will have to work out a lot in order to bulk up to the likes of Henry Cavill! No word on who will be playing his counterpart, teenager Billy Batson, but I expect that Levi is capable of acting as a teenager suddenly turned into an adult looking superhero. I still wonder who will be the antagonist since Dwayne Johnson, cast as Black Adam, Shazam’s #1 nemesis for the past 5 years, won’t appear in this movie and is getting his own movie instead. Director David F. Sandberg is already expressing his cynicism online about fan reaction.

And for the last news of the week, according to a Fandango survey, Wonder Woman and IT‘s Pennywise are the top Halloween costumes for this year! And yep, comicbook movie costumes dominate the list. Star Wars is there too tho with Leia, Luke, Rey, Kylo Ren… and the timeless classic (since the 80s), a stormtrooper!

And that’s it for the week. Before I go, I want to wish Happy Birthday to Andrew Scott, Jeff Goldblum, Christopher Lloyd, Emilia Clarke, ‘Weird Al’ Yankovic and BD Wong. 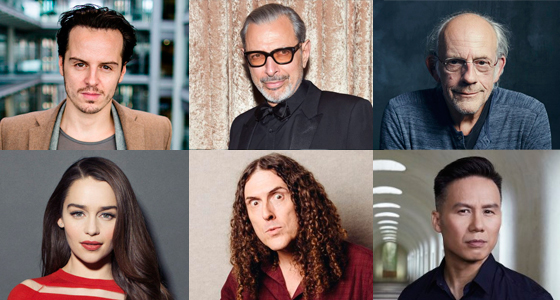