The Fangirly Diary of a Geek Girl: Long live the Leo meme

EW had two covers of Batman v Superman: Dawn of Justice with the titular characters, and the inside was full of info for the movie! Due to the Hi-Res of the covers, I can clearly see Henry Cavill is losing hair, and Ben Affleck still looks not so great with a deep frowing cowl mask. Also, they uploaded a new gallery of pictures, which are also full with interesting info about the titular characters, plus Wonder Woman, Lex Luthor and Alfred. My favourite is this one because body language. 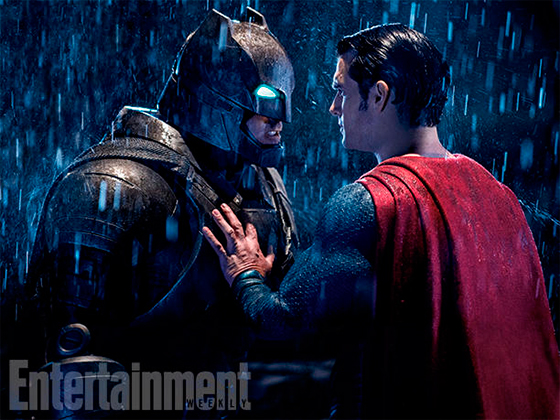 Still don’t know if Supes’ fingers are missing/blurry because of bad Photoshop or if he’s gripping Bats’ armor so hard his fingers are digging in. I guess I will know when I see the film!

But let’s talk about the real MVP of the film: Wonder Woman (even if I am still not totally convinced about Gal Gadot). New details about her were revealed on the packaging of a Wonder Woman bust:

The world’s first and foremost female Super Hero, Wonder Woman at once embodies the unrivaled force and supreme grace of a born warrior, and the genuine compassion and understanding of a true humanitarian. As a symbol of equality, power, and truth, her natural confidence and unmistakable intelligence make her an unequalled, if unexpected, ally. The immortal Amazonian Princess Diana keeps her eyes and ears open for intrigue as the beautiful and mysterious antiquities dealer, Diana Prince.

A new scene description of Captain America: Civil War has surfaced, and it involves Black Panther. It should be the one where Black Panther runs after Bucky in a tunnel shown in the trailer. The full scene involves Captain America and Falcon too. At the end of that, War Machine lies waiting to detain Captain America, and Black Panther reveals his identity. Apparently, the clip—with incomplete special effects—received a “generous applause” from the audience at the Auditorium Theatre, during Walt Disney Company’s annual shareholder meeting.

In the same meeting, Disney chief Bob Iger confirmed the release dates for the digital and disc-based versions of Star Wars: The Force Awakens. April 1 (nope, not fooling) will see the digital release, and April 5, 2016 will be the Blu-ray and DVD release. There will also be various types of packaging, besides the previously seen BB-8 one. Sadly, no blooper reel still. Dammit. I hope it’s part of the exclusive bonus content available in the Target version (or whichever). I can dream, ok!

Tom Hiddleston is getting a lot of press lately, what with the The Night Manager getting great reviews, as well as the promotion for the upcoming High-Rise. The latests press comes from TimeOut, where he talks about both roles, as well as the thing that makes him most angry about current society~

Prejudice. If I witness prejudice, it drives me bananas. It’s incredibly limiting, on any level. Race, background, religion. I mean, look at Trump, and the sort of things he’s said about Muslims. I was furious about it. That’s hate speech.

Yep, Hiddles ain’t a fan of Trump either. Good.

Here’s the new poster of Daredevil Season 2 where The Man Without Fear is about to open a can of whoopass on The Hand. He will probably get his ass kicked some though~ The show will starts streaming on Netflix in March 18, 2016. 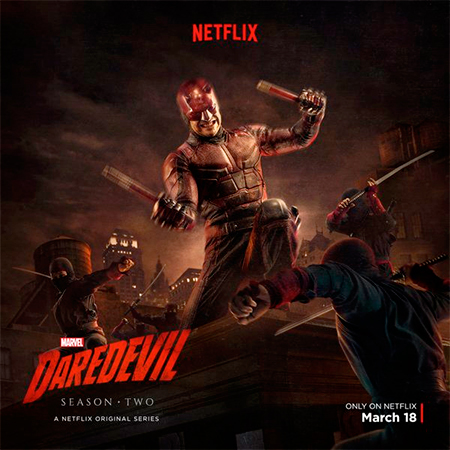 In totally unnecesary news, Sony is reviving Venom. Yep, we are, once more, getting this new franchise. This one is apparently unrelated to the upcoming Spider-Man movie in the works with actor Tom Holland, despite Venom being a villain/antihero closely linked to Spidey.

Here are some details about the Batman V Superman: Dawn of Justice R-Rated Ultimate Edition. Jena Malone is totally playing Batgirl/Barbara Gordon, who got shot and paralized by The Joker in Batman: The Killing Joke, right?

The longer version will include even more brutal fight scenes, and some new characters, including a secret one played by Jena Malone, who was cut from the theatrical release. That illustrates the push and pull of trying to foreshadow so many future stories. Sometimes you throw in too much and need to pull back.

Finally, here’s the first look of Marvel’s Star Wars: Han Solo comicbook! The five issue series will be coming in June 2016. Marjorie Liu is the writer and Mark Brooks does the interior art. Star Wars: Han Solo takes place between A New Hope and Empire Strikes Back, as most of Marvel’s recent Star Wars comicbooks do (besides the ones related to The Force Awakens, that is). So yep, this one also gives us another adventure in that three-year time period. Here’s what Liu had to say:

Basically, I was told that the story takes place between Episodes IV and V, and then they sort of just let me loose. I turned in several different ideas, but the core of them — what I kept at the front of my imagination: He’s this working-class dude who lives paycheck to paycheck who has a business to run. He’s the Han we know and love. He’s a con artist, he’s a smuggler, he’s this wisecracking, streetwise dude, but he’s got this internal conflict where there wasn’t one before. He’s really trying to figure out who he is. 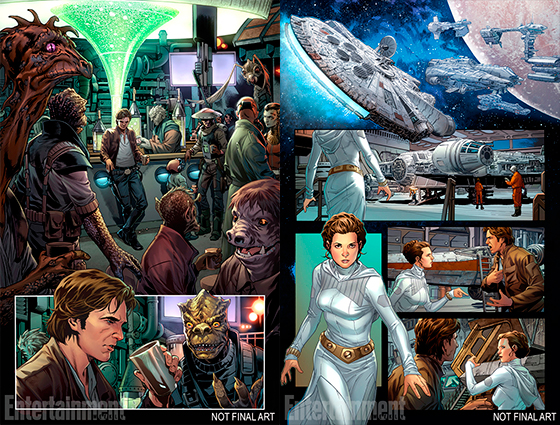 –
And that’s it for the week. Before I go, I want to wish Happy Birthday to Javier Bardem, Bryce Dallas Howard, Daniel Craig and George Miller.