“The Empty Hearse” will be the name of Sherlock Series 3’s first episode! Also, Mark Gatiss is a huge tease… is that Sherlock’s shoulder and head I spy in the clapperboard’s reflection?

Some Iron Man 3 news that include a new TV Spot:

And we finally know what becomeironman.com is all about! The UK version of the site has gone live, and it offers up the locations of an event where fans will be able to see themselves in the Iron Man suit with the use of motion capture technology. Please, please, let it come here. 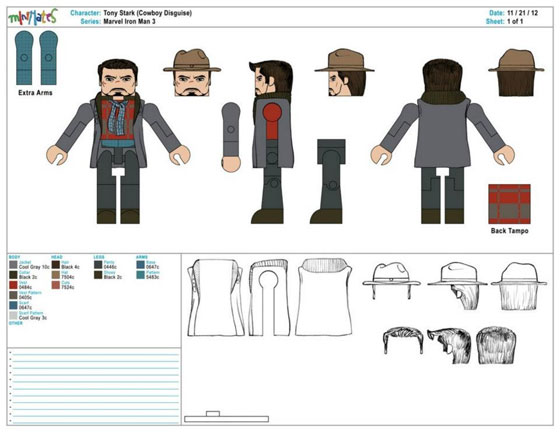 Because I love costume talk, here’s some about the latest show I’ve been watching an enjoying, History’s Vikings. If you don’t get distracted by the eye candy, you can see the costume is quite kick-ass even if parts of it are not historically accurate. BTW, their costume designer is Emmy award-winning Joan Bergin (The Tudors and Camelot)

One of the thing about the Vikings is that they were totally secure with nudity. Even in that cold climate, you were naked, and you just covered yourself up with furs. [The actors said] their costumes were surprisingly comfortable. There weren’t any plunging necklines or cinched waists, that was nice after The Tudors. There were no heaving bosoms, but the women had to be sexy in another way. Elegance and minimalism is often very attractive.

Hansel and Gretel: Witch Hunters is getting a sequel! While I liked the movie just fine, and I’m sure the sequel will be as least as visually stunning (more witches, yay!), I’ll only fangirl if both Jeremy Renner and Gemma Arterton are back (and his new sidekick and Edward the troll).

Dwayne Johnson won’t stop talking about either Star Wars or The Expendables. But now he also talks about Bond movies!

Skyfall is one of the greatest action movies of all-time to be in. Loved Daniel Craig. Would love to be a Bond baddie for sure! You know, my grandfather was in You Only Live Twice. He was a Bond baddie.

So you there’s gonna be a remake of Masters of the Universe, directed by John Chu. The guy totally wants Dolph Lundgren in a cameo or something:

I don’t know if Dolph Lundgren is around or what he’s doing but, yeah, I think that could be some fun if we could find a way. I hope he still has the loin cloth and the long hair and everything.

Talking about 80s actions stars, Jean-Claude Van Damme posted a picture where he met Stan Lee back in day… that is 1994. For some reason he thinks Chris Hemsworth would like him in The Avengers 2. Yeah, I totally missed that story. Jean-Claude has nothing against it! I, myself, am not so sure though.

Wow, Ken Watanabe and Juliette Binoche? In a movie about Godzilla? Are they so hard-up or is this movie going to be just that awesome? Is it both? Ok, I bet it can be as bad-awesome as 1998’s Godzilla. But I still want more info about it, dammit!

There’s a new game of Pottermore via PlayStation Home. I wish they had done this since the beginning. Sadly, the only thing that could make me interested once again in Pottermore will be a MMORPG. It still looks pretty nifty, though.